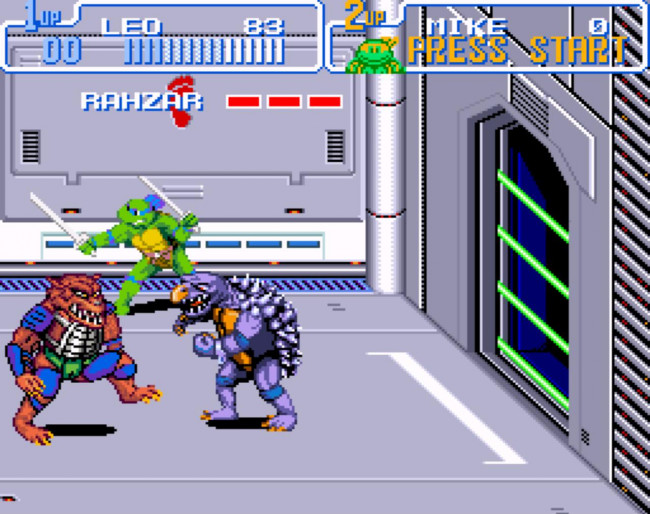 It was quite the daunting task to come up with a game for this, the Thanksgiving edition of Turn to Channel 3, when contemplating just what game I am the most thankful for when choosing the four games to review this month, but the more I discussed it among friends and family, the more I realized it truly was a no-brainer. Perhaps with the only exception being “Earthbound,” no game has shaped my time growing up with the Super Nintendo more than today’s topic – “Teenage Mutant Ninja Turtles IV: Turtles in Time.”

Oh sure, it’s obvious to anyone who knows me that I dig the “Teenage Mutant Ninja Turtles,” but for many of us, this wasn’t the only reason to be thankful for this game back in the day. But how does it stack up today? Well, let’s take to the sewers and find out!

With Konami being firmly behind every TMNT release on the NES and SNES respectively, the music has always held up with any and all Konami releases over the years of retro gaming’s glory days, but for my money, none come close to the music presented in “Turtles in Time.”

It’s easy, perhaps too easy, to simply state that a company, whether Konami or otherwise, could find a way to make the TMNT theme song sound great, but the challenge that was accepted by Konami was to create tunes for the whole game of equal value to what was expected by gamers up to this point in the series. What we got was a stellar collection of music that ranges from “Alleycat Blues” to “Sewer Surfin’,” and who can forget “Bury My Shell at Wounded Knee” and “Neon Night Riders?” The best retro games have a soundtrack that encompasses the message of the game to its target audience, and not one song presented here fails at capturing the essence of the game or the levels they are tied to, which is nothing short of remarkable.

The challenge for any video game company at the time was taking a game that was popular in the arcades and bringing that same look to the home consoles. While “Turtles in Time” doesn’t have quite as crisp-looking graphics as its arcade counterpart, what Konami was able to do with the SNES hardware is still pretty nice to look at. There are times when unfortunate flicker and slow down issues are apparent but, overall, I felt the level design, look of our heroes, and the interaction with enemies and bosses was very well done. Konami knew that both TMNT and the SNES were red hot at the time, and they couldn’t give gamers any less than what they deserved. Graphically, they did their very best to achieve that goal with the limitations given to them by the SNES hardware, which couldn’t touch what an arcade cabinet could do.

Believe it or not, modern gamers, there was a time when 2D brawlers like this one were the talk of the town, not first-person shooters or open world games, and what made games like this stand out is if a license was tied to it to make the most of the opportunity. Adding the TMNT name made the game that much more fun, but at the core of things is just an entertaining game that both passes the time and yet engages you in a way that can only be compared to being plopped down into the world of the cartoon show or comic books. Games like “Bucky O’Hare” and “The Simpsons” also accomplished this in their own ways, but only in the arcades. “Turtles in Time” took all of that excitement and crammed it into an SNES video game cart. Looking back at that bold move, how could you not enjoy a game like this?

Like any good brawler, there are enemies and bosses you just dread, and there are little aspects of the game you really enjoy, like simulating the act of throwing a Foot Soldier through your TV set. In the grainy graphics of the time, this doesn’t seem like that big of a deal today, but at the time, this was cutting-edge technology, and Konami made the most of what was afforded them.

“Turtles in Time” is the most beloved and most expensive game in the TMNT series of game on all three consoles – the NES, SNES, and Sega Genesis – with perhaps “TMNT Tournament Fighters” on the NES there are well, but only due to rarity and not for actual game quality. If you’re going to plop down close to $40 for a good TMNT game, why not let it be the best of the bunch? If there’s someone you know who loves retro games and our four heroes, then by all means, you owe it to yourself and them to hunt down a copy for them this holiday season. You won’t be sorry that you did.

Another month is in the books for me here at Turn to Channel 3 as we look ahead to finish the year with some titles on the NES that certainly shaped many Christmas mornings over the years. Next time, we begin “A Retro Christmas” with “Maniac Mansion” on the NES!

Until then, enjoy this holiday season, but take time out from those shopping runs and errands galore to game on!