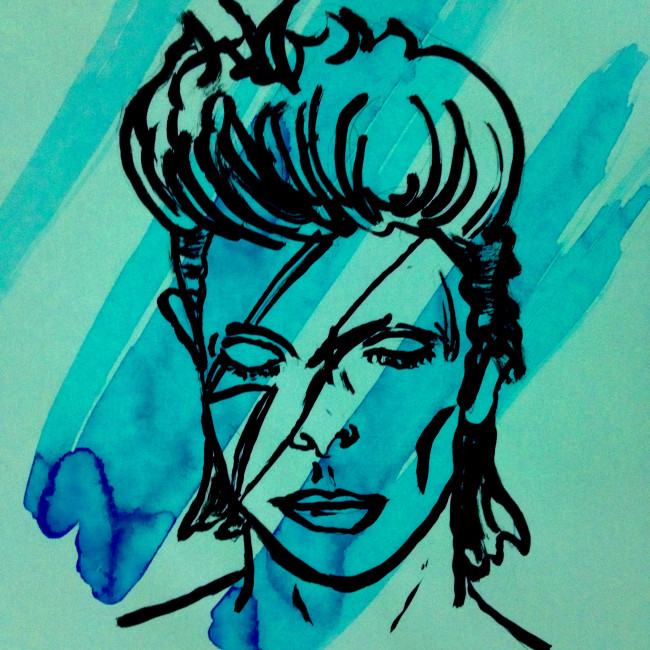 Just two days following his 69th birthday, David Bowie passed away on Sunday, Jan. 10 after battling cancer over the last 18 months. It has been almost 12 years since the Thin White Duke graced Northeastern Pennsylvania with his awe-inspiring presence, but judging by the local reactions on social media to his untimely death, he is well-remembered and well-loved.

The man born David Robert Jones recorded his first live album, “David Live,” at the nearby Tower Theater in Upper Darby in July of 1974, during his Diamond Dogs tour, which was briefly renamed the Philly Dogs tour after he recorded his ninth studio album, 1975’s “Young Americans,” at Sigma Sound Studios in Philadelphia. He referred to the music he created there as “plastic soul.”

In support of his 2003 album “Reality,” Bowie took his “A Reality Tour” to The Pavilion at Montage Mountain (which at the time was called the Ford Pavilion) in Scranton on May 27, 2004. Local music journalist Alan K. Stout, currently a writer for the Electric City, interviewed Bowie for an article before the show, which can be listened to below:

WILK-FM host Sue Henry posted a picture of her ticket from the show, along with Stout’s review, on the station’s Facebook page: 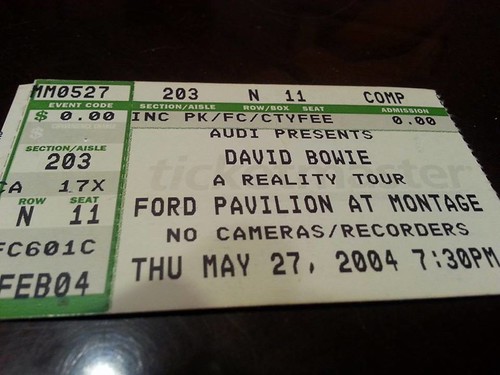 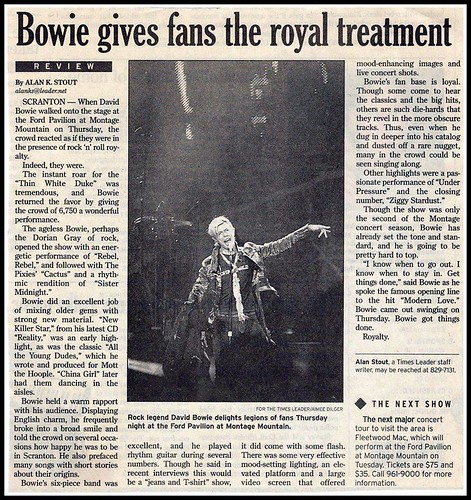 Henry and Stout discussed the interview and Bowie’s personality on WILK later that day:

Remembering David Bowie on 105 The River

AUDIO CLIP: I was asked to talk a little bit on the radio today about David Bowie and share some memories of covering his concert at Montage Mountain, interviewing him, and meeting him. I appeared on the Sue Henry show on WILK News Radio and the D.C. Taylor show on 105 The River. Here's an audio clip of my chat with D.C. on my radio home base of 105 The River. D.C. had no idea my favorite Bowie song is "Modern Love," but fittingly, that's the tune he played right before we went on. Obviously I would much rather have not done any of this today and I wish that David was still with us, but it was nice to share some stories and show him some respect. You can listen to it here. RIP.

One fan’s recount of the concert includes a funny story that Bowie told on stage that night in between songs:

As he is about to sing: “Oh baby, just you shut your mouth”, something happens, and it comes out: “Oh baby, I’ve got a mosquito in my mouth!” LOL. To which he now spends the rest of the show trying to extract. After China Girl, he explains about the mosquito and goes into a story about when he was in Australia and bit into some sort of vegetable roll and there was a cockroach in it, “but only HALF a cockroach…” eeeeewwwwwwwwww.

The setlist in Scranton was as follows:

A video of Bowie performing a very similar set earlier that year in Philadelphia was posted on YouTube by another fan over a decade later:

Stout wasn’t the only NEPA resident who talked to the man (or alien) himself – Rich Drees, editor and publisher of Film Buff Online, noted that the Stroudsburg band Solution A.D. opened for Bowie in New York, Philadelphia, and Washington, D.C., soon after they signed to Atlantic Records in 1996.

I thought he was immortal. RIP David Bowie. Had the honor of opening for him 3 times with Solution A.D. His management met with us and told us don’t talk to him, don’t take pics, don’t look at him etc….. There I am sitting in the hall of the Electric factory before sound check and he comes walking down the hall. I am staring at the floor as to not make eye contact and he walks up to me and tells me he enjoys our album and was glad we could do the dates and asks how his crew was treating us. Class act all the way.

Just for fun, we thought we would also include these random local tributes as well. Artist Kristen Peterman made this chalk drawing outside the F.M. Kirby Center in Wilkes-Barre this morning:

Our own little tribute to #DavidBowie, courtesy of our own @CallMeKP. pic.twitter.com/0YlefObEWc

The 2014 Clarks Summit Festival of Ice was music-themed, so The Wright Center for Primary Care in Clarks Summit sponsored an ice sculpture of Bowie that can be seen below: 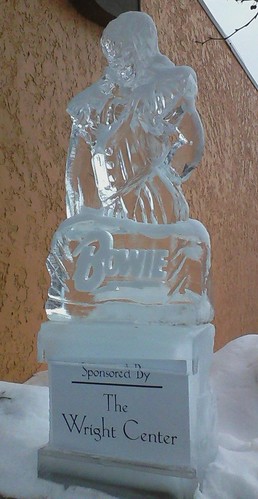 And finally, former Scranton/Wilkes-Barre band Underground Saints covered “Suffragette City” and “Under Pressure” in their last performance at the now-defunct Rattler in Pittston in 2013:

“It’s the terror of knowing / What this world is about / Watching some good friends / Screaming, ‘Let me out!’ / Pray tomorrow gets me higher.” Rock on, NEPA.