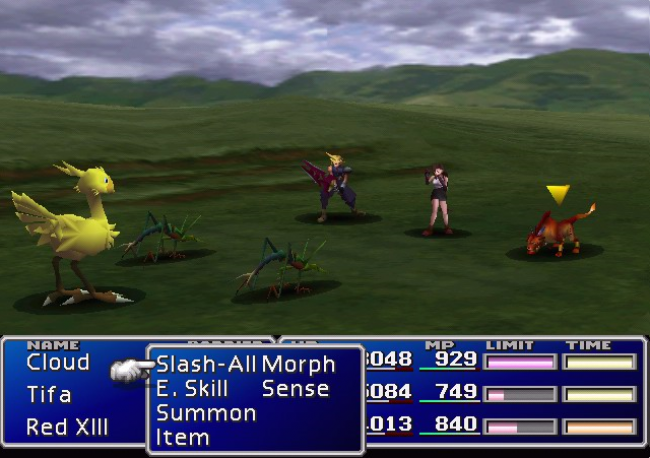 Video games, like other forms of entertainment, are no strangers to their sacred cows, defended by the most diligent of fanboys (and girls, for that matter), which can often lead to Internet riots whenever anyone questions the greatness of a game. However, that’s where a guy like me comes in, to really challenge a game in a review without favoritism, without bias, and without anything but nostalgia and historical context in the realm of video games.

Today, as we trudge on with our “Fantastical February,” we take a look at a game that has inspired people, gamers and developers alike, while also leaving some people wondering just what is so special about it. Today, Light Warriors, we journey back to a time where once again the video gaming world gasped in delight at a game on the PlayStation known simply as “Final Fantasy VII.”

Veteran video game composer Nobuo Uematsu brings the series back to its roots, tapping into the Super Nintendo days of “Final Fantasy” with some superb tracks with synthesized musical scores and, let’s face it, truly throwing caution to the wind with what was possible in 1997. I’m going to touch on one very important aspect of this later on, but for now, I just want to say that if you stripped away this soundtrack from “Final Fantasy VII,” you wouldn’t have this juggernaut of the RPG world that so many loyal fans bow down.

What Uematsu was able to do is create a soundtrack that fully encompasses the long, arduous journey you are on, not skipping a beat or missing any big or little point in the story, and that’s a feat in itself. Some truly great works of sci-fi film and literature influenced “Final Fantasy VII’s” plot, so a soundtrack that showcased the emotions the characters would feel in such a dynamic story was crucial; it was done in spades here.

A mix of beautiful cinematic scenes, staple polygonal graphics, and breathtaking background art is a unique one, but it is pulled off to near flawless proportions in this game. The summons and magic spells are among the most amazing pieces of graphic art in video games up to that point. “Final Fantasy VII’s” world is often a dark one, but even in the black decay that inhabits various portions of Cloud’s journey, there is beauty, if in nothing else than the detail of many sections of the game.

Yes, graphics in games would get much better, and even “Final Fantasy VII” itself is due for the tried and true HD upgrade in the coming years, but for 1997, if you wanted to immerse yourself in a world of decadent video game graphic splendor, “Final Fantasy VII” could do no wrong.

Let’s not delay this any longer. Yes, “Final Fantasy VII” had some epic battles, a great system of upgrades, and a storyline that was influenced by the likes of Frank Herbert’s “Dune,” Mary Shelley’s “Frankenstein,” and even “Godzilla,” but that’s just the tip of the iceberg as you take Cloud Strife on a journey of rediscovery, all while trying to save the world from… wait for it.

Limit Breaks and Materia allowed characters and their skills to be pushed to new levels of awesome and, despite mostly following a linear format, with hidden Materia, weapons, and optional plot sequences in the game, it merits being played through at least twice.

So that’s it, right? No, of course not. In 1997, in many forms of entertainment, it was becoming almost lame to cheer for the good guys in wrestling or in movies, for example. In video games, this seems to have gone on far longer, and this was largely due to a limited amount of villains that actually struck fear in the hearts of gamers while also garnishing respect. In short, many of them lacked charisma, and then, well, Sephiroth happened.

The charismatic, megalomaniac “One Winged Angel” debuted in “Final Fantasy VII” with a theme song that makes gamers, even today, nearly two decades from the game’s release, collectively crap their pants when hearing it. This is the music that starts off with something right out of the movie “Psycho” and then turns into what would happen if a bunch of monks singing a Gregorian chant began worshiping a video game villain. Even as I wrote this review listening to this song, I kept looking over my shoulder waiting for someone with an exceptionally long katana to slice my head off with merciless glee.

Kefka in “Final Fantasy III” was a lunatic, but gamers mostly laughed at him. There’s nothing funny about Sephiroth, and his cold and cunning ways just make you either strive harder to beat the game or secretly wish you were him. Either way, few video game villains have earned the term “iconic,” and if you don’t think Sephiroth qualifies, go ahead, ask him.

Gamers still debate which entries in series like “Final Fantasy” and “The Legend of Zelda” are truly the best, and I’m not here to judge “Final Fantasy VII” in that light. What I am here to say is that this began Square Enix’s longstanding relationship with Sony and the PlayStation consoles, and it was done so in such a way that made Nintendo look foolish for ever losing ties with the company. It also ushered in cool video game villains; darker, more mature stories and language in RPGs in the West; and successfully put the PlayStation and Sony on the map.

Next week, we have one more entry in “Fantastical February” to cover here on Turn to Channel 3, so until then, continue to game on!