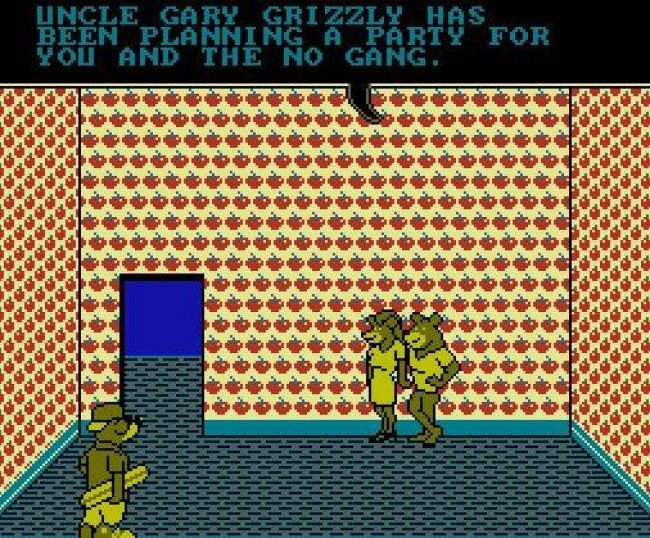 It seems that every decade, whether it is in gaming or otherwise, has those moments where something takes over the whole country, and not all of it is good, obviously. In the end, however, for better or worse, it becomes a staple of the decade, something that is looked upon, whether fondly or with a chuckle, for further decades to come.

In any event, today’s no good, rotten son of a game is called “Wally Bear and the NO! Gang” on the Nintendo Entertainment System. Ponder that for a moment – a game where the title suggests a bear and a gang of kids who say no to drugs was going to be on a game console with the word “entertainment” in its name. Is your head spinning yet? Don’t worry – you’re not alone.

For those of you who know where I’m going with this, don’t say anything just yet, but if someone could cue up the “Twilight Zone” theme music, that would be great. OK, thanks. Now, imagine if you will a video game that plays the same music, which sounds like it is coming out of a little girl’s ballerina music box, over and over again. This would suggest that any and all issues involving kids and drugs is no big deal and just as easy as cranking a handle on said music box. What’s that? You don’t agree? Well, of course you don’t, because “Wally Bear and the NO! Gang” is not a story of candy-coated dreams of fighting drugs in the ‘80s; it is hiding the real truths on the subject, and when I find out what those truths are, I will tell you, smarty pants! Ahem…

In the meantime, please, indulge yourself in this mind-numbing music, which really doesn’t fit the game at all but, then again, this is a game about a sunglasses-wearing, skateboarding bear cub facing drug problems, so there’s a lot about this game that doesn’t fit at all. It begins with the most cheery music you’d ever expect to hear in a video game about drugs. I wonder if this is what the guys at Rockstar were thinking of using for “GTA III?” Oh, and don’t ask about the sound effects, because they don’t fit into what’s going on in this game either.

As one plays through this abomination, you definitely stop no less than 34 times to wonder if the developers of this game about drugs were on drugs when they created it. I’m sure they called it “research” or something.

In any event, one of the many reasons you pose this question would be the horrid graphics your eyes must endure as you play, and it all begins with the worst interior design work for a bear family’s home in a video game. I mean, I know bears will eat whatever they can get their paws on, but is there any reason why, when Wally’s parents are talking to him at the beginning of the game, the wallpaper is all apples? I know I was just a kid in the ‘80s, but I don’t recall apple wallpaper ever being a big trend back then, and this was an era where we still had toys that could kill us.

Wally looks ridiculous on his skateboard, the levels are all pretty bland, from streets with random buildings to a subway with random bottles and junk all over the place, and then there are the enemies. Keep this in mind, bear parents of the 21st century – you don’t have to worry about your bear cub having drugs forced on him in school because, if Wally teaches your cub anything, it is that the random exploding birds and bright orange dogs roaming around will probably kill him first.

This game is the most basic of platform titles, with more of an emphasis on jumping over, sliding under, and just flat out avoiding everything as you cruise around on your skateboard. Yes, there are some items you can pick up that make the process far easier, but none of these make the game any less boring and redundant than it would be if you just went through the game like a skateboarding bear after consuming LSD. Actually, that might be fun but, hey, we don’t condone drug use here on Turn to Channel 3.

We also don’t condone playing this game, like, ever. Don’t let anyone tell you that you need this for your retro gaming collection either because, chances are, their copy is cursed or they secretly (or not-so-secretly) hate you – and themselves. If mindlessly avoiding enemies to spread the word on the dangers of drugs to human-like bear cubs sounds like fun to you, then great, but chances are that’s a very small demographic of gamers.

Remember, kids, it is indeed still true – just say no to drugs. It is also quite true that you should say no to anything having to do with “Wally Bear and the NO! Gang.” Even if you have kids who hate going outside, bring a stick inside and have them play with that before exposing them to this. Trust me, you’ll thank me later.

So, how does one top a title such as this? Well, we remain on the NES console next week by taking a look at a game with some superb music… and that’s about it. “Silver Surfer” is on tap for next week, so be sure to heal up from this review before then – take some legal drugs, like aspirin.

Most of all, remember, in order to appreciate the great classic games we have, sometimes you have to step through a whole lot of bear manure. That’s just the law of the land.

TURN TO CHANNEL 3: ‘Alice in Wonderland’ isn’t so wonderful on the Game Boy Color