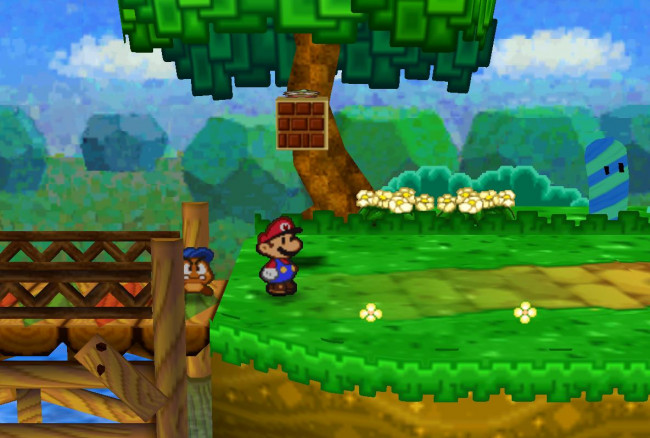 Fall is here, and with it comes a lot of changes in the atmosphere. Today’s topic does a good job of taking what was established and expanding upon it, in a way changing the very atmosphere of a gaming genre.

Welcome everyone to our last review for our “64 September” theme, and it is a game that is near and dear to my heart, as it has many ties to my store and what has made it a destination for local gamers. Today on Turn to Channel 3, we cover “Paper Mario” on the Nintendo 64.

Let’s unfold this unique Mario adventure and jump right in!

Obviously the big connection “Paper Mario” has would be to the original “Super Mario RPG” for the Super Nintendo, and that’s a pretty tall order to fill, considering that was the last great game for Nintendo from what would become Square Enix, who changed their allegiance to the Sony PlayStation not long after. Imagine trying to recapture that kind of greatness and fan following without one of the masterminds behind the inspiration. One of the ways Nintendo was able to do this, and subsequently change directions in a way, was with a stellar soundtrack of tunes that fit the mold of “Paper Mario’s” predecessor while still assisting in carving a different niche in the gaming world.

With a nice mix of warm, inviting tunes, coupled with some cheeky bits and some ominous tones, there’s something there for every kind of Mario fan as well as nearly any kind of RPG fan. Nintendo knew if they were to try capturing lightning in a bottle twice, they’d have to start with a stellar soundtrack, and “Paper Mario” delivers in spades.

I truly believe in the same way audiences were grabbed by what would become a staple of late ‘90s-early 2000s gaming, polygons, audiences were once again astounded by the flat, cardboard feel of “Paper Mario.” Some may find it unnecessary and perhaps too needy towards gamers who wanted something more, while I see it as just another way that Nintendo took an established franchise and made it stand out even more. I can understand how some folks might find that confusing, how something flat can stand out, but it does for the sheer fact that, up to that point, it had not been attempted, and doing so with Nintendo’s prized possession, as far as franchises go, shows a lot of faith by Nintendo in what they were trying to accomplish.

I’d also like to add that this style of graphics, in a way, also helped give birth to a more comedic style in Mario games, which we’ve seen in another “Paper Mario” titles and the like since.

“Paper Mario” combines what we know as traditional RPG elements with concepts found only in Mario titles. Mario jumps and uses his hammer through the majority of the game to overcome obstacles in his path in the game’s overworld. Puzzles and boundaries set here are based on Mario’s partners and their abilities. Partners are accumulated throughout the game in various locations, but only one can accompany Mario in the overworld, interchanged at any given time.

These same partners assist Mario in turn-based battles, while not having individual hit point statistics, so any damage to them results in temporary paralysis. Attacks here are similar to other RPGs, but timing a button press accurately or performing another command can influence the power of them. Flower points are used for these special attacks, which can be increased through leveling up via Star Points (experience points) that are earned in battle.

Additionally, a Star Gauge, Badge System, and a plethora of items also aid Mario and his friends on their quest to locate seven Star Spirits and stop the evil Bowser from ruling over the Mushroom Kingdom.

While critics and diehard RPG fans are split in their opinion of the game, some believing it to be superior to “Super Mario RPG” while others felt the game was too easy and copied a bit too much from the SNES classic, one thing is undeniable – “Paper Mario” is still one of the most sought-after titles on the Nintendo 64, and perhaps one of the last great gasps of greatness before the console finally rode off into the sunset.

Well, with that, September is in the books for me as we bid farewell to the Nintendo 64 for a time. October means Halloween and some spooky games coming your way here on Turn to Channel 3, beginning with a Sega Genesis game that many of the console’s loyal fans may have missed – “Haunting Starring Polterguy!”

Until then, keep your supply of pumpkin spice filled (if you’re into that sort of thing) and avoid that chill in the air as you game on!