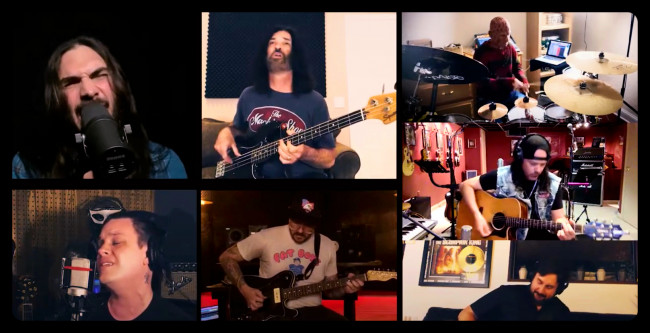 Nick Coyle, a solo artist from Berwick as well as the singer of Wilkes-Barre nu metal band Lifer and guitarist/backing vocalist of Cold, is back with a new entry in his all-star “Corona Sessions” series, this time bringing in even more local artists for a quarantine jam with past and present members of Crobot, Breaking Benjamin, Candlebox, Earshot, Black Label Society, Black Star Riders, and Walking with Lions.

Recording safely from home, Coyle explained that his mission for the ongoing project is to “bring artists together despite social distancing and offer fans a sense of inclusiveness during these troubling times.”

“The only good thing that has come out of this whole COVID-19 shutdown is that now musicians who may have never have had the opportunity to collaborate before now have the time to do so,” Coyle said in a press release.

Temple of the Dog was a Seattle grunge rock supergroup with members of Soundgarden, Pearl Jam, and Mother Love Bone, including Chris Cornell and Eddie Vedder on vocals. Released as the lead single on their platinum-selling self-titled and only album, “Hunger Strike” peaked at No. 4 on the Billboard Mainstream Rock Tracks chart in 1991.

The mostly local lineup of musicians chose “Hunger Strike” not only because of its importance to the 1990s music scene and the impact it had on each of them as artists, but because of the relevance it still has today.

“‘Hunger Strike’ is one of those songs that will always be relevant,” Coyle noted. “That’s the genius of Chris Cornell. His music and lyrics are timeless.”

“I’ve always loved ‘Take a Picture’ and was originally thinking of doing a duo acoustic version with just me and Geno of Filter,” Coyle said.

“Lindsay, our bassist in Cold, is staying with Geno during this lockdown and wanted to be a part of it too, so then I thought, ‘Who else do I know that would be into playing on this?’ So I reached out to Chad to see if he wanted to play drums, hit up my guitarist in Lifer, Aaron, to play keyboards, and my old friend Brian Quinn from Candlebox to play acoustic guitar. And then I asked my good friend and bandmate in Cold Johnny Nova to play electric guitar. Luckily, everyone was into it and excited to be a part of it. I am grateful that these guys – and gal – wanted to be a part of my crazy vision!”

Both Cold and Candlebox were scheduled to head out on extensive tours earlier this year, but they were postponed due to the coronavirus pandemic. Cold is currently supporting their latest release, “The Things We Can’t Stop,” on Napalm Records, which Coyle co-wrote with vocalist Scooter Ward as well as co-produced and mixed. Candlebox is promoting their forthcoming album, scheduled for release later this year. It will be their second record with Brian Quinn on guitar.

While stuck in quarantine, Lifer was also able to finish up and release their first new song in 18 years, “The Start of Something Else,” and Coyle quickly followed it up with his cover of Cyndi Lauper’s “True Colors” as well as his own original solo track, “I Can’t Figure It Out:”