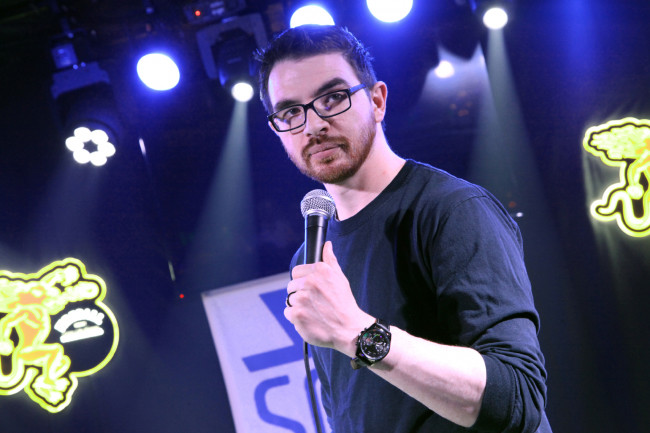 In times like these, some people need positive and reassuring words to lift their spirits and take their minds off the grim situation. Other people accept how bad things are and embrace a dark sense of humor to get them through this harsh reality.

If you find yourself in the latter group, the new comedy album by Zack Hammond is for you.

The 33-year-old stand-up comedian has been entertaining those who aren’t afraid to laugh at anything on the Brewery Comedy Tour since it began in 2018, sharpening some of his most pointed material yet into an explicit set that became his fourth album, “…Because I’m Considerate.”

The material he has tested around the country might cover some heavy topics – his “awful parents,” recent divorce, disastrous shows, Nazis in America, school shootings, pedophile teachers, fat shaming, and more – but Hammond is never shy about sharing his personal thoughts and feelings with perfect strangers.

“It’s just what I find funny, and I have tried and failed at writing jokes that are palatable to a wide range of people. I enjoy being open about my flaws and failures, and I get a thrill at presenting my warped view of the world to anyone that will listen. I make sure there are jokes, though… always got to be jokes.”

The Nanticoke resident knew he had the right material for this hour after testing it on the road with comics like fellow Northeastern Pennsylvanians Dan Hoppel and Ellen Doyle.

“I had been doing the act that became the album for about a year and a half to two years, which is usually the ripe point for me, and I was able to take the act to any venue in any town and it was working. Six months ago, I figured I would just record every set – I own a Zoom H4n recorder – and pick the best one as the album. Three months in, the world decided to end and I didn’t know when I would get on stage again and still perform the act with the same confidence and timing. Luckily, I had recorded a great set in Delaware and decided that that set would be the album,” he explained.

“The Brewery Comedy Tour was started by Ron Herron of Herron Entertainment. He got tired of the way clubs did business and knew breweries were a great place for stand-up… and they are. The two years on the road were immensely helpful because I was on stage at least three to four times a week testing and refining jokes. So long as I was listening and reacting accordingly, the act got better and so did I.” 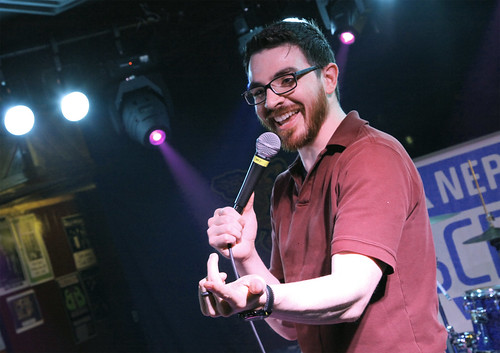 The night of Sunday, Jan. 12 at Midnight Oil Brewing in Newark, Delaware was his last show that week. He knew if this one didn’t go well that he had plenty of backup recordings from the past month, but he soon realized that this was the one.

“The place was sold out with over 100 people, and they were an amazing audience. Luck would also have it that the night before in Virginia, I pissed off a group of teachers with a bit about teachers fucking kids. I talked about the incident for the first time on this show and it was perfect. A lot of things just went right on this night in Newark and I said to my opener, Ellen Doyle, ‘This is the album’ after I got off stage,” he recalled.

“The crowd was amazing. They were on board from the second the show started and only got better as the night went on.”

Performing at breweries has been a much better experience for him than online shows hosted over Zoom, which he has had to resort to since the coronavirus pandemic shut everything down.

“[Breweries] have been excellent for comedy. I believe you have to work harder in them because they’re not a traditional comedy venue. They’re not designed for comedy, so it’s our job to set them up for comedy – create makeshift stages, set up the lighting and seating, then do a show. A club has everything set up already and people know what to expect because they’ve been around longer and they get the benefit of the doubt. People think, ‘They’re not going to bring in a terrible act.” Breweries could be a crapshoot for an audience, so I make sure that myself and whoever I bring on the road with me bring our ‘A’ game on every show no matter the circumstances,” he emphasized.

“Unlike a Zoom show, they’re actually in the room with you. You get a different vibe and energy when everyone is in the room together. You’re lit up, center of attention, with your voice coming out of speakers and you have to keep everyone’s attention. You can directly interact with the audience and they’re reacting in real time. There’s no lag from a bad Internet connection. If a joke bombs, you know it immediately and have to course correct. A lot of Zoom shows, the ‘audience’ has their mic and camera turned off, so you’re just yelling into a void… which has been most of 2020.”

Hammond started in stand-up at 21 and has been performing in venues of all kinds, participating in comedy festivals, and winning talent competitions for 11 years. The Maryland native self-recorded his debut album, “Sorrow Tree,” in 2012 with “just a bunch of jokes” he had and earned a professional upgrade in 2015 after winning the first season of NEPA Scene’s Got Talent. The grand prize included a live recording of his next big set just a few months later at Origins Gallery in Stroudsburg, which became his second album, “Appalling.”

He followed that up with “Utilitarian” in 2018, perfecting his comedic voice at The Cafe in Plains Township, but he noted that, “I have failed more than I have succeeded,” staying humble despite the fact that he is now a full-time comic. He is proud, however, of “…Because I’m Considerate” and feels that it is his best work to date.

“Overall, I feel the writing is better. I’m finally in a groove where I know myself and how to present that to anyone and make them laugh. As a result, I just ‘went for it’ in terms of telling the jokes I really wanted to tell. I know the way I choose to approach topics is walking a tightrope because of how blunt I am, and it can turn people off quick, so I had to make this material as perfect as possible to get the laughs I wanted and I felt the jokes deserved,” he said.

“I talked about a lot of fucked up things on this album and can’t really say I have a favorite joke. I will list what I liked the most/am proud of: 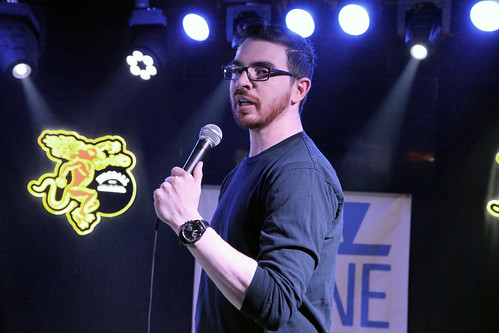 While the album’s cover art depicts a cartoon version of his bathtub suicide, things have been going quite well for Hammond lately.

“For the past year, I have been on the road touring breweries, clubs, theaters, and everything in between. I’ve experienced the wonderfully awkward decency of the West Coast, the backwoods hospitality of the South, the insanely too trusting, leave-our-doors-unlocked North, and the cesspool that is the East Coast,” he described.

“[During the quarantine] I have been writing regularly, performing on Zoom shows, and baking bread with my wonderful girlfriend.”

Released on June 1, the album’s title is inspired by a joke about never having kids, so his retirement plan is suicide.

“I love the picture that I paint in the bit. ‘…because I’m considerate’ is one of my favorite lines and lets the audience know that if you’re going to blow your brains out, do it in a bath tub or shower, as it’s an easier cleanup. Be considerate,” he cracked.

“I’ve had the image in my head for months and I had to find an artist that could put it to paper. Mavis L. Honeyduke happened to be the person who took my idea and made it a reality that exceeded my expectations.”

The audience reactions have been “all positive” since it hit Bandcamp one month ago, and physical copies will be available once he can get back on the road.

“I figured I have the album and no one has anything better to do – let’s take advantage,” he said.

“Everyone that has listened to the album has enjoyed it. I’m hoping to change that and find some people to hate me. … I get more hate when I’m performing live than when I post stuff online. I’m kind of lucky that no one really gives a shit about me other than the people who already do. In fact, I’ve caught more hate online for commenting on a post than any material I’ve put out there. I’m far more abrasive without jokes… so I’m just going to stick with jokes.”

In an era where a small but vocal minority can ruin careers over jokes posted online, Hammond isn’t worried about losing fans or being “canceled.”

“I’m willing to have people pissed at me and fight with me over what I joke about. I tell fucked up jokes – I’m going to get fucked up responses. However, when it comes to ‘canceling’ people, that’s where it goes too far. The idea that a comic can lose work because of people who weren’t coming out to see them in the first place is so confusing to me. We are in a supply and demand world. If I have something that people want to see and pay money for, why does someone or a group of people who don’t support and never supported me have a say in what other people want to enjoy? It’s jokes – they’re not to be taken seriously. They aren’t statements. They are words coming out of a clown’s face. Why anyone would take them seriously is beyond me,” he explained.

“Comedy is there to make people laugh, and comics are like flavors of ice cream – some you like, some you don’t. If you don’t like what someone jokes about, walk away and find someone who you do like. You don’t have a right to be offended, but you do have the ability to enjoy the things that don’t offend you. Try that.”

Other than looking forward to a haircut, he is just eager to get out of Luzerne County and back on stage to make people laugh, complain, or whatever reaction his “flavor” of comedy can elicit. The chaotic state of the world right now has “stirred up all kinds of shit” in his twisted brain, so expect all of that to come spilling out in a brewery near you pretty soon.

“I have 11 pages of notes on my phone for my next hour. I’ve tested some of it in Zoom shows and open mics, but I’m waiting to get on the road and in front of real people to really start testing it out,” he left off.

“The Brewery Comedy Tour is already booking shows for the summer and fall, so I’ll be on the road again shortly. Mike Peters is a booker/comic with three cats that is getting shows set up in the dirty parts of New York… which is my favorite part. And a lot of other things are in the works that will get me out again and back into the cold hearts of my fans.”

Learn more about Zack Hammond, Dan Hoppel, and their experiences on the Brewery Comedy Tour in Episode 79 of the NEPA Scene Podcast: