From a press release: Scranton indie rock favorites Blinded Passenger will reunite at the fifth annual Electric City Music Conference after a two-year hiatus. While vocalist Patrick McGlynn and drummer Steve Werner often collaborate on acoustic solo and side projects, the reunion will bring the full band back together. “Reunions are always fun, so I […]

Blinded Passenger was already on the NEPA Scene Podcast this week and recorded a live acoustic version of their song “Born Here” for us (available to watch/stream/download for free here), but we’ve got one more exclusive with the band before their debut full-length album, “The Electric,” is released. We’re premiering the Scranton-based indie rock band’s […]

Gearing up the release of their debut full-length album “The Electric” early next month, Scranton’s Blinded Passenger has been putting out songs and videos to keep people excited, including this stripped down acoustic cover of “This Must Be the Place (Naive Melody)” by Talking Heads. Their album of all original music will come out on […]

Formed in Scranton in 2006 by singer/songwriter Patrick McGlynn, Blinded Passenger has released a few EPs over the years and is finally ready to debut a full-length album, “The Electric,” this fall. In anticipation, the group – which features drummer Steve Werner, guitarist Stefan Ogonosky, and bassist Kevin Stone – released the title track from […] 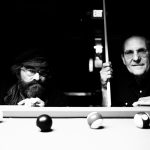