From a press release: Due to overwhelming demand, comedian Jo Koy will return to the F.M. Kirby Center in Wilkes-Barre on Thursday, Oct. 21 as part of his Just Kidding World Tour. Doors at the Kirby Center (71 Public Square, Wilkes-Barre) open at 6:30 p.m., and the show starts at 8 p.m. Tickets, which are […]

The Scranton Comedy Club is back in full swing, which means regular pricing has returned for its monthly stand-up shows at the Holiday Inn Scranton East in Dunmore. New York/Los Angeles comedian Cory Fernandez, who has appeared in movies like “Cop Out” starring Tracy Morgan and Bruce Willis and television shows like “Orange Is the […]

From a press release: It was announced today that comedian and podcast host Theo Von will be performing at the F.M. Kirby Center in Wilkes-Barre on Saturday, Oct. 9 as part of his live stand-up tour. Doors at the Kirby Center (71 Public Square, Wilkes-Barre) open at 5:30 p.m., and the show starts at 7 […]

The Scranton Comedy Club successfully returned to hosting live events on March 27, and soon after, it announced its next stand-up show at the Holiday Inn Scranton East in Dunmore. New Jersey comedian Bob Levy, a regular guest on “The Howard Stern Show” and “The Opie & Anthony Show” who has appeared on Comedy Central […]

From a press release: Like all Northeastern Pennsylvania music venues, the Mauch Chunk Opera House shut down last March due to the coronavirus pandemic, and it only reopened briefly for a 50 percent capacity show in July before closing again for the rest of the year. With the COVID-19 vaccine rolling out now and government […]

Before the coronavirus pandemic, the Scranton Comedy Club opened in a newly remodeled location and hosted several successful monthly shows until the statewide shutdown. It was able to reopen briefly for a sold-out socially distanced event on Nov. 28 before all indoor entertainment was shut down again in December. With spring just around the corner […]

From a press release: Today, the F.M. Kirby Center in Wilkes-Barre announced that it will present stand-up comedian, actor, writer, and activist Eddie Izzard in a “global online conversation” with host Elliott Forrest on Friday, Feb. 12 at 4 p.m., in partnership with ArtsRock. Tickets, which are $15 for a single view, $25 per household, […]

From a press release: While Penn’s Peak has been forced to postpone or cancel most of their big concerts due to the coronavirus pandemic, the Jim Thorpe venue has been able to host live music through its Social Listening Series and Peak Fest shows. The socially distanced events have continued with the Winter Encore Series, […] 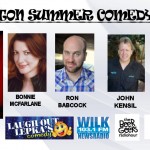