Camp out one last time this year at the Fall Out musical festival in Weatherly on Oct. 16-17

From a press release: It’s officially fall, which means the first-ever two-day, two-stage Fall Out camping concert is right around the corner. One Koast Entertainment, known for the Jam at the Dam, will present Fall Out on Friday, Oct. 16 and Saturday, Oct. 17 at the Flying Aces Campground in Weatherly, featuring 24 acts from […] 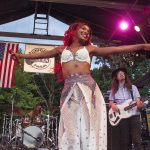