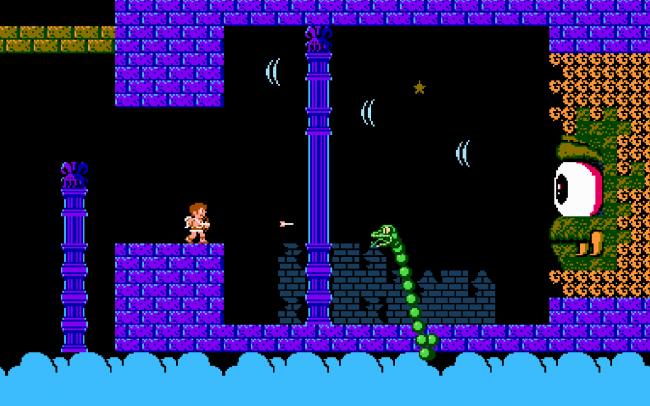 In any form of entertainment, it’s easy to become a piece of the vast history of that industry that’s often overlooked in comparison to the more popular brands and franchises that seemingly fill the airwaves on a daily basis. Luckily, over time, a lot of these unfortunate victims of the oversaturation of the “chosen ones” get a second look and gain better appreciation from the masses. Such is the case with today’s Turn to Channel 3 topic – “Kid Icarus” on the original Nintendo Entertainment System.

Debuting during a time when Link’s adventures and Mario’s romps through the Mushroom Kingdom took center stage, it’s easy to overlook the importance of this game in the history and success story that is the NES console. Today, we take another look at this NES classic to see if it’s worth hunting down for your retro collection, and more so, what has given it cult status in the hearts of those who fell in love with it from the title screen through the end credits. Get your arrows ready and watch out for the Reaper as we look at “Kid Icarus!”

Like many of the things that cause “Kid Icarus” to be a game that lacks the notoriety of some of its peers, it isn’t gifted with a soundtrack that rivals other far more popular NES titles. However, this isn’t to say that the soundtrack isn’t good with its steady, usually upbeat tunes that help guide you and keep you motivated as you make your way through each perilous level in the game. In addition, the tunes that play when a Reaper sees you or when you lose a life, while shorter in length, still provide “Kid Icarus” with a theme and a sound uniquely its own.

The sound effects are pretty standard for the most part: Pit shooting his arrows, the sound of them connecting with an enemy, and the collecting of things like hearts and hammers. One could argue that, in this category alone, Kid Icarus does a solid job of utilizing the old saying that “Less is more.”

While some may say this game skimps in the music category, “Kid Icarus” puts you in a world that very much lives up to the expectations set forth by such games as “Super Mario Bros.” and “The Legend of Zelda.” You’re in this mythical world with dangers like pits, narrow platforms, and enemies that are just as frustrating in this game as they would be if they were in any other NES title.

Pit is simple in design, his enemies and levels getting more of an in-depth treatment, but this really is par-for-the-course 1980s Nintendo graphics we’re looking at here, which creates a fondness in the hearts of those who grew up with it. The graphics in “Kid Icarus” are just as recognizable and iconic as any other classic NES title, with that all too familiar Nintendo seal of approval on the cart.

I’m not one to reminisce and declare that, “Kids these days just don’t know what a hard game feels like,” lamenting like some old fart about days gone by, but there is a grain of truth in that statement. I think, to further delve into it, kids don’t know what it’s like to play a difficult game that’s still fun to play despite its difficulty. “Kid Icarus” was the first of many games in my life that deceived me into believing it was this cutesy, fun, easy game that I could grasp and then master with ease. In truth, it is among one of the most difficult games in the vast NES library, but don’t let that deter you from experiencing a unique adventure.

“Kid Icarus” has a lot of those staples of NES gameplay in it, from collecting to buying items, some of which increase the potency of your arsenal; memorable (and frustrating) enemies that range from simple snakes to eggplant lords that curse you, and, of course, a crazy Reaper who throws its children at you (Who says the 1980s weren’t a unique time in gaming?), all of which increase steadily in difficulty.

Despite all of this, “Kid Icarus” is a game that rewards you for your efforts, even as you sometimes wish you could put a hole through your old tube television with your NES controller. Every good game knows when to brandish the whip and bring you to your knees with crippling challengers while offering you gameplay that still keeps you coming back for more.

“Kid Icarus,” like “Metroid” for the NES, is sadly not credited enough for its impact on the industry of video games. With its wrap-around levels that started at the bottom and took you soaring to new heights, the landscape of gaming as we see it now would be a much different place without it.

Despite critics still weighing in on the more recent usage and reboot of this classic franchise, one thing is for certain – “Kid Icarus” doesn’t need to be the next big thing or the one everyone remembers. It is quite content nestling itself in the confines of a gamer’s mind, just between that last dungeon you finished in “The Legend of Zelda” or your most recent slide down the flag at the end of a “Super Mario Bros.” level, and really, there’s nothing wrong with that, now is there?

That will do it for me today here on Turn to Channel 3. Join me next week when we take a look at a popular arcade racer’s console conversion on the often-overlooked Sega Saturn. Until then, stay warm, think of spring, and always game on!

TURN TO CHANNEL 3: Neo Geo’s ‘Baseball Stars Professional’ is good but not quite major league