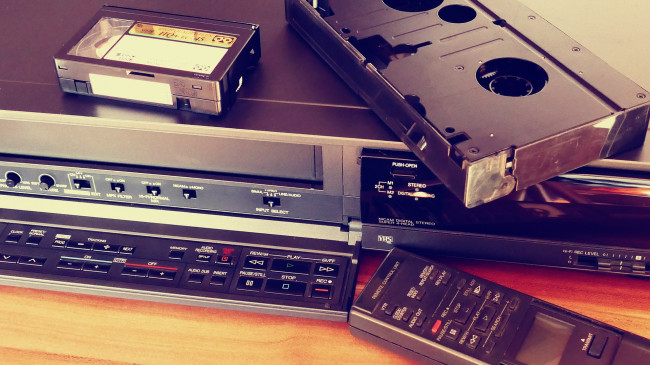 When Earl Kess founded the Severed horror film showcase in 2009, he admits he didn’t expect much to come of it. In truth, his ambitions were modest.

“I always told everyone that after the first Severed event, that would be all I’d need. I really wanted that experience, and when we had that first show, I got it. As long as we got enough people in the doors so that we could afford to have those doors open, I was happy,” Kess says. 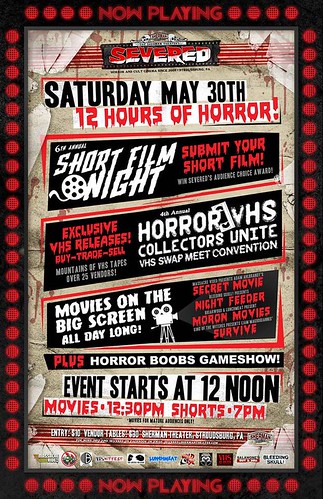 Hit the fast-forward button and Severed is now a regular destination for horror fans in Northeastern Pennsylvania. While it originally began with the intent of screening cult classics on the big screen, Severed has metamorphosed into something more. This Saturday, May 30, Severed’s sixth annual Short Film Night and fourth annual VHS Swap Meet Convention will return to Stroudsburg’s Sherman Theater.

The $10 all-day event includes vendors, video-tape traders, a new “Museum of VHS” exhibit, and a horror trivia contest that will allow attendees to put their knowledge to the test in the hopes of winning various gory goodies.

In addition to the short film festival, there will be afternoon screenings of rare underground movies, such as the enigmatic “Night Feeder” (an obscure ‘80s B-movie previously only released on VHS in Poland), the independent zombie flick “Survive” (brainchild of teenage friends, director Liam Makrogiannis and special effects artist Johnny Dickie), and the Johnny Carson-favorite short film compilation “Moron Movies.”

“Moron Movies” director Len Cella will be in attendance to meet fans and sign autographs as well. A special “secret” movie will also be presented by Massacre Video.

As much as it’s become a can’t-miss event for gorehounds and tapeheads, Kess’ approach is still modest.

“I want it to continue growing. It’s something that’s coming up a little bit and people are talking about it, and that’s great, but the main thing is that it remains the kind of thing where people feel at home,” Kess says.

“I never want it to turn into a convention where you’re paying $30 just to get in. I just want to do something for this community and to give us a place for all this stuff that we love.”

The spirit of rediscovery

With all the changes and additions that the event has integrated over the years, Kess says the focus is still squarely on the short film festival. 11 shorts will screen at Severed, showcasing the work of independent filmmakers from Pennsylvania and beyond, and this year’s event will also see the release of “Severed Shorts Vol. 1,” a limited edition compilation video of some of the best shorts screened at past Severed events.

Of course, true to Severed’s VHS nostalgia spirit of rediscovery, not all of the shorts at Severed are cutting-edge films from young up-and-comers.

“It was actually done in 1991. I was surprised they picked it,” Mark Demise, the Carlisle, Pennsylvania-based filmmaker behind “Live Undead,” one of the shorts screening this year said. “I made it with my friends when we were in eighth grade. Before we could drive, instead of playing sports, this is what we did.”

Aside from being a filmmaker, Demise has also served as lead singer for horror rock band Werevilsdare and is the founder of the Atomic Crypt Records & Video distribution label. With its grimy, do-it-yourself, shot-on-video style and barely-there plot about heavy metal zombies on the loose, “Live Undead” lives up to Demise’s rock ‘n’ roll roots.

“Horror and rock have a lot in common. The fanbases are rabid, and they’re both really underground,” Demise says.

“You can’t even put it into words. One of my first childhood memories was watching ‘Frankenstein Meets the Wolf Man,’ which is still one of my favorite movies. At the end, Bela Lugosi’s playing Frankenstein’s monster, and there’s a part where he gets zapped and this evil look comes over his face, and when I saw that, something just went through me. It’s got a power to it. I’ve been a horror fan ever since.”

Seemingly on the other end of the spectrum from Demise are John Iwasz and Sanjeev Surati of Philadelphia-based Small Basket Studios, who, prior to trying their hand at filmmaking, had their professional backgrounds primarily in software development. They even worked at Microsoft at one point. On the surface, that hardly seems very “rock ‘n’ roll,” right?

“Both of us are big fans of B-horror movies and always have been,” Surati says. “I remember when ‘Army of Darkness’ premiered, me and a bunch of friends got horribly, horribly drunk at a friend’s house in Seattle and we just had this horde of punk rockers and metalheads pour out of this house, completely out of control, lurching up the street towards the movie theater.”

Now, Surati and Iwasz are lurching just as ominously through the independent horror scene. After forming Small Basket just a few years ago, the two have had their award-winning horror-comedy shorts selected by and honored at film festivals in both America and Canada.

The duo’s latest, “Spammer,” is set to screen at Severed. Boasting the tagline “Be careful what you phish for,” it’s an H.P. Lovecraft-inspired cautionary tale about an Internet scam artist whose annoying messages lead him to supernatural danger.

Despite their own fandom, both men admit that they were largely uninitiated into the greater horror fan community until their own forays into filmmaking. For them, film festivals like Severed have become more than just showcases for their creations – they’re lifelines to the like-minded.

“We’ve met some really neat people through events like this,” Iwasz says. “These are people we would have never met any other way, people with the same creative spirit, and we still maintain contact with them. Invariably, whenever we attend one of these events, I always walk away inspired.”