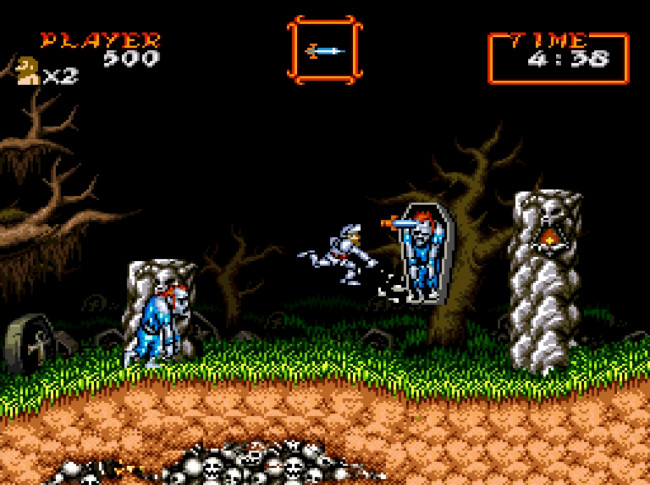 Can you imagine that it’s been a year that I’ve been writing for you fine folks here on Turn to Channel 3? It’s true! I brought this column to NEPA Scene with a vision of sharing these common memories and bonds we have as gamers, and I’m proud to say I’ve really enjoyed the feedback and opinions on what I’ve reviewed here. A special thank you to my boss and NEPA Scene founder Rich Howells, as well as the other swell people here on staff who are always so encouraging and receptive to what I’ve tried to do here.

Today, we’re finishing up the month of October with a game that scares gamers for reasons you wouldn’t expect, but perhaps most of all frustrates them in such a way that can only be described as “throw your controller at the television screen” difficult. Of course, since we’re keeping with our spooky theme, I’m talking about “Super Ghouls ‘n Ghosts” on the Super Nintendo. Journey with me as I take a look at one of the most challenging games on the console, as well as one of the best versions of the classic “Ghosts ‘n Goblins”-style gameplay we’ve loved since the days of the arcades!

Like a lot of games that made the leap to the SNES after a stellar outing on the NES, everything you knew from the original is enhanced tenfold, with some of the most breathtaking and engaging tunes on the SNES; it’s a soundtrack that really doesn’t let you down from beginning to end. While enhanced versions of original NES tunes are great, the soundtrack also has brand new music that further showcases Capcom composers and their already established skill for creating memorable video game music.

The sound effects in the game are plentiful, far more than I think you’d expect in a 16-bit game, with weapons and enemies having varying sound effects to set them apart from one another. Who doesn’t get chills of excitement when that map music plays? It’s such a short little tune and yet probably the most iconic sound coming out of this game.

Once again, Capcom took what you remembered and enhanced it to such a degree that you’re nothing but dazzled by the results. The levels, Arthur, and the seemingly countless enemies and bosses all look brilliant and are full of color, despite staying true to the brooding and spooky themes of the game. Designers pulled out all the stops to make a game that, in just the artwork alone, puts you in a world that’s ripe for adventure and action. Oftentimes, the term “super” was thrown around too much during this period in gaming simply to help sell more games, but in the case of “Super Ghouls ‘n Ghosts,” a world we’re quite familiar with is given a much-needed facelift, further expanding on the borders given to us in the past. In design alone, “Super Ghouls ‘n Ghosts” in comparison to its predecessors is the equivalent of when Mario made the leap from his classic 2D games to the once unheard-of 3D worlds of “Super Mario 64.” It really is that big of a deal.

Anyone who grew up on games like “Ghosts ‘n Goblins,” the “Ninja Gaiden” series, and even games like “Kid Icarus,” “Metroid,” and the “Castlevania” games knows the harsh difficulties of “Super Ghouls ‘n Ghosts” well. Cheap hits by enemies that wait just for the worst time to attack, often causing you to plummet to your death, are plentiful and were probably responsible for you learning your first curse word back in the day. At the same time, the steep difficulty only added to the fun of the game, even though I’m sure many members of the gaming community groan in agony when they realize that you don’t have to beat “Super Ghouls ‘n Ghosts” just once – oh no, it demands you beat it again to find a weapon that was unavailable to you even after full completion of the game. In the ‘90s, when this game debuted, that would be like asking someone to win a four-hour game of family “Monopoly,” only to take a five-minute break and then do it all over again. Still, is it just me or is such a worthy challenge, despite the increasing amount of frustration, missing from today’s gaming scene? I think so.

“Super Ghouls ‘n Ghosts,” as well as its predecessors, has suffered from the redheaded stepchild effect that has plagued many Capcom staples not named “Street Fighter” due to the poor management of Capcom in recent years. Even “Mega Man,” the company’s proud mascot for many years, has suffered terribly from improper treatment of the Blue Bomber’s founding creators by Capcom. Right now, the company isn’t sure who to hitch their wagon to or who their true crown jewel is, while a company like Konami, long famous for the “Castlevania” franchise, the only comparable series of games, has always treated the Belmonts as the center of their own video game universe. Still, fond memories, albeit sometimes memories of stressful game nights and childhood frustration, have always made “Super Ghouls ‘n Ghosts” one of the most beloved and respected games on the SNES.

That does it for me in the month of October on Turn to Channel 3. Join me next month when we look at some games many retro gamers are thankful for, yours truly included.

Until then, be sure to eat plenty of candy, especially you parents with an arsenal of candy-gathering children, and stay up late to game on!