Releasing the single last month, Pottsville heavy groove rockers Crobot now have an official music video for “Not for Sale,” the first taste of their new album “Welcome to Fat City,” due for release on Sept. 23 via Wind-up Records.

The video combines three of the group’s major trademarks – an energetic live performance, an underlying deeper message, and a healthy dose of humor. Living up to the title of the record, there’s plenty of big guts on display as some dads rock out and stuff their faces with hot dogs, though there’s more than just humor on display here.

“‘Not for Sale’ takes you into orbit around the sonic spectrum of our latest album and is an anthem for all of us who work hard enough to make our own luck. It’s a cry to hold on to our own humanity, never letting anyone else manipulate our destiny,” singer Brandon Yeagley told Vice’s Noisey in June.

“Who paid your debt to be here? No one… and my soul is not for sale.”

Stream the new track below: 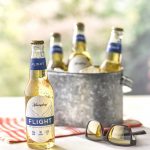