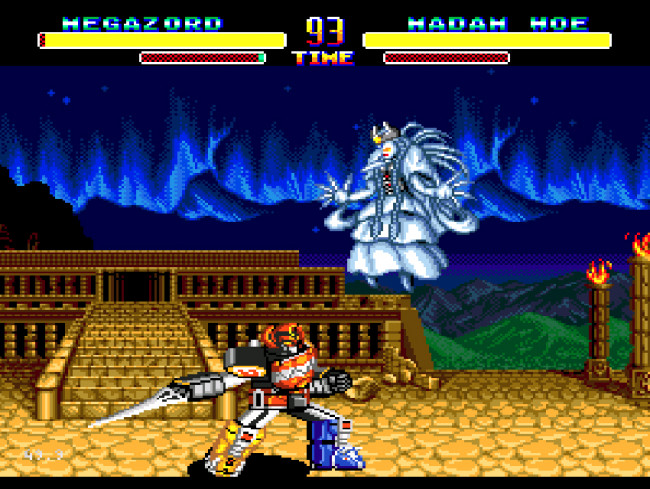 Here on Turn to Channel 3, we fully acknowledge how unique the ‘90s were and how fads seemed to grow like weeds. That being said, these are the same fads that later became embedded as vital pieces of our childhood memories. While to some, many of these are largely forgettable, but one still shines brightly, ignited by three simple words…

Today, kiddos, we take a radical trip back to the ‘90s with “Mighty Morphin Power Rangers” on the Sega Genesis, so fire up your Zords as we return to Angel Grove!

As many of my colleagues know, I am probably the biggest critic and, let’s be honest here, hater of all things Sega Genesis. However, over the years, I’ve grown to appreciate certain games as well as some aspects within others. Keeping that in mind, I still feel in most cases that the audio capabilities of the Sega Genesis lack in many departments. A lot of people with tech spec knowledge will disagree with me, but the proof is in the pudding.

The sound quality in this title is very muffled and tin can-sounding in comparison to the Super Nintendo version, which is a shame because, as we all know, the program is chock full of adrenaline-pumping music that just isn’t showcased here. There were moments where it would shine but, for the most part, the soundtrack to the game is very repetitive and mediocre at best. The sound effects are pretty good, although I found some of it a bit unnecessary, such as the Megazord making a sound when it truly doesn’t other than with weapons.

I did, however, find the cut scenes in the game very well done, along with the sprites as you do battle. I wouldn’t call the artwork in this game a masterpiece by any means, but I do feel that there was enough color and texture to avoid the graphics looking muddy. When you’re trying to convey the action and excitement of a popular television show, you need to find a balance between having enough color but not so much that you’re blinding people, and I think the programmers did a great job there.

Now here’s where my memory serves me incorrectly. I get a lot of flack for not covering Genesis games as much, so I decided to cover this version of the game. I had totally forgotten the glaring fact that this is more of a fighting game than a beat ‘em up, as you find in the SNES version. While having the ability to fight as the Green Ranger and use the Dragonzord (complete with awesome battle flute sound effect) is pretty cool, the novelty runs thin very quickly.

Regardless of whom you choose, you face the same enemies in the same order, once as a Ranger, and then as the Megazord or Dragonzord when Rita decides to make her pet project gigantic. There’s definitely more depth in the SNES version because of this drastic difference, but if you’re a big Power Rangers fan and you really don’t care what the game is like, then there’s something here for you – just don’t expect it to keep you busy for long.

We all laugh and shake our heads at today’s generation of children and whatever they bug us or their parents for but, in truth, we were once them, and Power Rangers were our “must-have” thing that drove our parents bonkers. Playing this game reminded me how easily we were tricked into being “the cool kid” at school playing these games when really they were average at best. I take nothing away from this game capturing our childhood memories, but past that, the Genesis version of “Mighty Morphin Power Rangers” might as well just be your run-of-the-mill, generic fighter in a decade chock full of them. Relive it for the memories, but don’t stay for a great game because you simply won’t find it.

Next time, we finish up with “Mighty Morphin Power Rangers: The Movie” on the Sega Genesis!

Until then, watch out for putties and game on!