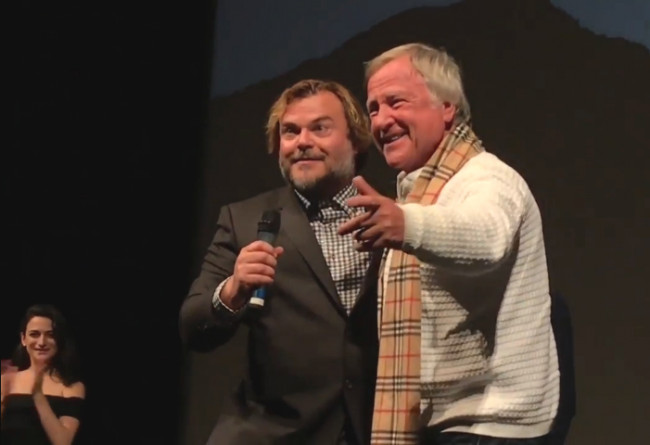 While we still don’t have a trailer for the anticipated comedic drama “The Polka King,” which stars comedian, actor, and musician Jack Black as real-life Hazleton polka legend (and convicted con man) Jan “Lewan” Lewandowski, coverage of its world premiere at the Sundance Film Festival on Sunday, Jan. 22 has given us many more details on this film with local connections.

After the screening of the new movie, the cast and crew gathered for a Q&A where Black praised the doc for helping him get into the role, which was clearly suited for him.

“I had the advantage of this amazing documentary that I could watch over and over again and study and watch the real Jan Lewan do his thing. And there’s tons of YouTube videos of Jan. And I went down long, long wormholes of YouTube polka musicians, which I highly recommend. There’s some insane musicianship in the lost art known as polka,” Black said. “I was born to do it.”

To the surprise of the audience, the premiere was attended by Lewandowski himself, who served five years in prison for his crimes and is currently paying restitution to his largely elderly victims. Black went on to say that he talked with Lewan regularly to further enhance his performance.

“It was an incredible character, and Jan has had some incredible highs, some of the highest highs and some of the lowest lows, and that’s what you look for when you’re looking to bring something to life. It was a great experience for me. And I also had the benefit of being able to talk to Jan through FaceTime. We did some interviews from FaceTime,” he explained.

“I just got to ask him everything about his life, from birth to now, so that was incredibly helpful. I will be releasing the audio tapes that I recorded. No, just kidding – never!”

When someone asked him if he visited the Polka Hall of Fame in Ohio, Black said that he didn’t, but joked that he will be making a pilgrimage there “right before we do the sequel.”

“I don’t have any polka on my iTunes library. It was like a new experience, but I connected with that music really, really quickly, like I felt like there was some polka in my DNA. I am a quarter Polish and maybe didn’t know it yet. Although they say that polka was actually started in Germany. Is that true? Do you know the origins, Jan?” Black asked Lewandowski.

“Actually in Czechoslovakia,” he responded.

“Oh, in Czechoslovakia? Danke,” Black said with a smile. “But I had a blast with the polka and secretly I’m hoping that we bring polka back with this movie. I’d love to go on the road and just do like a full-on polka tour with the band. Doesn’t that sound like fun?” 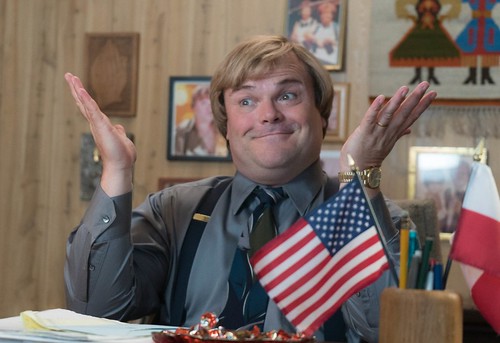 Jason Schwartzman, who plays Lewan’s bandmate and best friend Mickey, a fictional character who was made up for the film as a combination of several real-life people, commended Black for taking the lead in the movie and on the set.

“It really was like a band, and [Jack Black] really was our leader. And the crew was like a gigantic band and all the actors were musicians in the band. He really was like the leader at the front of the stage. He set the tone and tempo and the rhythm for the whole thing, and he made it so easy for us to fall into place behind him. The only thing I brought was my clarinet and a little bit of hope,” he recalled.

Schwartzman noted that while the other actors faked playing their instruments, Black really did sing, with a few exceptions, live every day on set.

When asked how much of the movie is true to life, they admitted that liberties were taken with the source material. Black estimated it was about “87 percent” true, and even Lewandowski commented that it was “pretty much true” just after seeing it.

Co-writer/director Wallace Wolodarsky said that the filming in Rhode Island was very hot and that they did not shoot in Hazleton at all.

“We were afraid to go to Hazleton,” Wolodarsky said, though he did not clarify if this was because they were afraid of backlash or Hazleton’s harsh reputation for criminal activity. “We circled. We circled, but we never [went].”

Jenny Slate was asked about how different the role of Marla, Lewandowski’s wife, was for her to play and the challenges of that.

“In the film, Marla goes from about 17 years old to… 37, 38. So, first of all, it’s a long time period to kind of get your hands on and try to be consistent with, but I think the character of Jan… he’s so magnetic, and I see Marla as someone who really wants to believe in the light and is a really vibrant, bubbling person, and Jan represents hope, and he really believes in himself and he does his best to believe in her. That connection was beautiful to me. I don’t know if it has anything to do with being married or not,” Slate described.

“There’s that steadiness in their partnership that’s really beautiful because they are a strange match, and she really sees him as something exotic, and she wants to be something exotic. And in her way, I think she is, and he helps her to be that. It’s so sad to me that it breaks down, but it’s also how it goes, ups and downs.”

The Q&A ended on a high note, with Lewan unexpectedly joining Black on stage to sing his famous “Rappin’ Polka” a capella, which he has said in other interviews was inspired by the rap music he was introduced to in prison:

Come tried with tribulation
But I stay in meditation
Overcome my situation
You can say I did it all
They wanted to see me fall
I been locked behind the walls
But still I’m standing tall
I’ve done lived “La Vida Loca”
But now I’m rapping polka!

Watch the entire Q&A below:

No national release dates for “The Polka King” have been announced yet, but early reviews from critics at the premiere seem favorable so far. While some felt that it portrayed Lewandowski a bit too positively, not focusing enough on his dark side and how his crimes affected his victims, most agree that Black did an exceptional job with the role and carried the film overall.

Mikulak, who was also in attendance, thoroughly enjoyed seeing his documentary become a major Hollywood production.

“I really liked it. Jack Black and Jenny Slate were amazing, and the rest of the cast was stellar,” Mikulak told NEPA Scene. “I think it’s a real crowd-pleaser and should do really well.”