In a press conference held at The Ritz Theater in downtown Scranton two weeks ago, the Northeast Pennsylvania Film Festival announced its 2019 film selections and planned programming in venues throughout downtown Scranton and Waverly on Friday, March 22 through Sunday, March 24. One of the events that stuck out immediately was the appearance of Charles Brandt, author of the bestselling true crime book “I Heard You Paint Houses” that will soon be a film by one of the greatest directors of all time, Martin Scorsese, with a tentative fall release.

A former prosecutor and Chief Deputy Attorney General of the State of Delaware, Brandt often speaks about his interrogation and cross-examination techniques that are still used by law enforcement today, but this will be a much different discussion for the past president of the Delaware Trial Lawyers Association. Set for Saturday, March 23 at 3:30 p.m. in the private event space at the Bittenbender Building (126-132 Franklin Ave., Scranton), the presentation is titled “When Scorsese Calls” and will detail his meetings with the master filmmaker, Academy Award-winning actor Robert De Niro, and Oscar-winning screenwriter Steven Zaillian.

“When we had script meetings, it was Scorsese, De Niro, Steve Zaillian, and me in the room. It was like winning the lottery,” Brandt said. “I sat there with these men as part of a very important and historic project. It was awe-inspiring and humbling. They’re such geniuses and I don’t know their craft, but I know that the questions they asked me about the people involved showed a sensitivity and humanity that I was in awe of.”

Tickets are $50 in advance at nepafilmfestival.com or $60 at the door. Brandt will sign books sold at the event following the presentation. Seating is limited, and it is expected to sell out due to the popularity of the book, the story’s local connections, and growing interest in the film adaptation that will include some anticipated reunions as well as many firsts.

“In the course of nearly five years of interviews, Frank Sheeran (played in the upcoming film by Robert De Niro) confessed to Brandt that he conducted more than 25 hits for the mob, including NEPA’s own legendary don, Russell Bufalino (played by Joe Pesci) who, according to Sheeran, is said to have ordered the demise of Jimmy Hoffa,” the film festival press release described. While the book has its critics who doubt Sheeran’s account, it has received praise from law enforcement, other true crime authors, and even members of the Bufalino family. William “Big Billy” D’Elia, successor to Russell Bufalino as godfather of the family, said, “Sometimes you can believe everything you read,” according to the book’s publisher, Steerforth Press.

“Sheeran’s confession that he killed Hoffa in the manner described in the book is supported by the forensic evidence, is entirely credible, and solves the Hoffa mystery,” former Chief Medical Examiner of the City of New York Michael Baden said.

“My source in the Bufalino family … read ‘I Heard You Paint Houses.’ All the Bufalino guys read it. This old-time Bufalino guy told me he was shocked. He couldn’t believe Sheeran confessed all that stuff to [Brandt]. It’s all true,” New York Police Department organized crime homicide detective Joseph Coffey added.

“If the made men Brandt rubbed up against during his five years with Sheeran suspected what Sheeran was confessing to him on tape, they’d both have been promptly whacked,” retired undercover FBI agent and author of “Donnie Brasco” Joe Pistone commented.

Al Pacino has been cast as Hoffa in the film that is bound to have scenes set in Northeastern Pennsylvania, as the Bufalino crime family operated out of Pittston, Scranton, and Wilkes-Barre.

While the movie won’t be screening at the local film festival, it is expected to debut on Netflix in October with a very limited theatrical release (likely so it is eligible for awards next year), a first for Scorsese. He may be doing this not only to break ground by working directly with the streaming service, but also because they’re paying for his (and the company’s) most expensive film yet with a budget that has reportedly surpassed $140 million and may go as high as $200 million. After more than a decade of planning and development, it seemed like “The Irishman” would never happen until Netflix came in to foot the bill.

“There had been a lot of juggling regarding who would put money in and when it was coming,” De Niro said in an interview with Collider in December. “When Netflix came in, they just came in. They relieved a lot of anxiety and grief about doing it in a certain way, the way Marty wanted to do the film, and it’s as it should be. So now it has to be presented in a traditional grand style. When Netflix switches to small screens, even if today they can be big, that’s something to be worked out and debated. I don’t know where that stands.”

The rising budget is due to the long shoot (the longest of Scorsese’s career at 106 days), the handsome paychecks for its director and stars, and mainly to pay for the costly CGI by Industrial Light and Magic that will de-age the cast so they can play these people throughout different decades of their lives. Now 78, Pacino talked about this technology on The Bill Simmons Podcast last year and how it affected his performance.

“There’s computers on the camera sides, and they’re various ages. So physically, you’re changed. I was playing Jimmy Hoffa at the age of 39, they’re doing that on a computer. We went through all these tests and things. And then I’m playing 48, even in my 50s. Someone would come up to me and say, ‘You’re 39.’ [You’d recall] some sort of memory of 39, and your body tries to acclimate to that and think that way. They remind you of it,” Pacino explained.

“The idea was to go back four, maybe five decades, so Marty wanted the people at ILM to do this as best as it’s been done to this point, to make us look younger,” De Niro said in the Collider interview. “And I was excited by that. It gave us the freedom to do scenes when we are younger and not worry about makeup so much. Sometimes we used movies when I’m in my 50s, in my earlier years, just without makeup. So I’m very curious to see how it looks.”

While it will be interesting to see if this truly works on screen, the real payoff is in watching Scorsese and De Niro collaborate for the ninth time, and while this is the fourth time De Niro and Pacino will star together in a film, “The Irishman” will surprisingly mark the first time Pacino will be directed by Scorsese. Pesci is even coming out of retirement to rejoin his “Goodfellas” and “Casino” collaborators.

Don’t expect this movie to be another “Goodfellas,” however, according to Oscar-winning editor Thelma Schoonmaker, who has edited Scorsese’s films since “Raging Bull” in 1980.

“It is not ‘Goodfellas.’ It’s completely different. It’s wonderful. They’re going to love it. But please don’t think it’s gonna be ‘Goodfellas,’ because it isn’t,” she emphasized in a recent interview with Yahoo Movies UK, adding that this will make her editing feel different as well.

“It’s a different kind of movie; it’s episodic, it’s not narrative. When you do a narrative film, you’re always saying, ‘Oh well, you know, we could slim that down, we could move the shot, maybe we should integrate that, maybe we should flashback with that.’ That’s not the way this movie is. It actually came together very quickly; it’s very different. You will see. It’s extremely different and it really works, which is very exciting.”

Schoonmaker noted how ambitious and risky the entire project is with its special effects. Other movies have certainly attempted to de-age actors, with mixed results, but this film takes things to a whole different level.

“We’re youthifying the actors in the first half of the movie. And then the second half of the movie they play their own age. So that’s a big risk. We’re having that done by Industrial Light and Magic Island, ILM. That’s a big risk. We’re seeing some of it, but I haven’t gotten a whole scene where they’re young, and what I’m going to have to see, and what Marty’s going to have to see is ‘How is it affecting the rest of the movie when you see them young?'” she said.

“Interestingly, we’ve only been able to screen for very few people, because they’re wearing some things on their faces, and on their clothes, that tracks their movement… Nobody minds. Nobody minds watching them play young because they’re gripped. Very few people have seen it because we can’t show it to a big audience. But the characters are so strong, it doesn’t matter – it’s really funny. I don’t know what it’s going to be like when we get it all – that’s the risk. And it’s an expensive project; [Netflix is] taking a risk there.”

In addition to the face tracking, De Niro talked very briefly about having to wear platform shoes to play the much taller Sheeran on “The Tonight Show Starring Jimmy Fallon” last April:

Along with De Niro, Pacino, and Pesci, the star-studded cast also includes Harvey Keitel, Anna Paquin, Bobby Cannavale, and Ray Romano. No official images or trailers have been released yet, but some behind-the-scenes photos of the production have come out that have been shared around online and turned into fan posters: 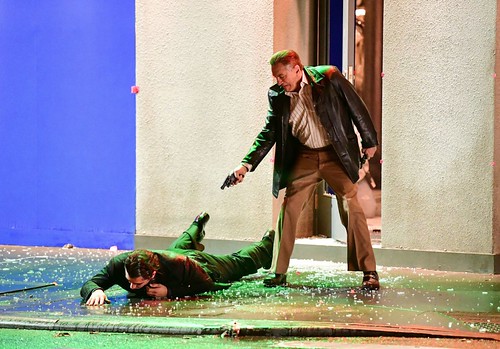 Those who can’t wait for the film to come out can pick up a copy of Brandt’s book, “I Heard You Paint Houses: Frank ‘The Irishman’ Sheeran and Closing the Case on Jimmy Hoffa,” and read the real story, which now includes some updates in anticipation of “The Irishman,” according to the publisher:

Updated with a 57-page conclusion by the author that features new, independent corroboration of Frank Sheeran’s revelations about the killing of Jimmy Hoffa, the killing of Joey Gallo and the murder of JFK, along with stories that could not be told before.

“I heard you paint houses” are the first words Jimmy Hoffa ever spoke to Frank “the Irishman” Sheeran. To paint a house is to kill a man. The paint is the blood that splatters on the walls and floors. In the course of nearly five years of recorded interviews, Frank Sheeran confessed to Charles Brandt that he handled more than 25 hits for the mob, and for his friend Hoffa.

Sheeran learned to kill in the U.S. Army, where he saw an astonishing 411 days of active combat duty in Italy during World War II. After returning home, he became a hustler and hitman, working for legendary crime boss Russell Bufalino. Eventually, Sheeran would rise to a position of such prominence that in a RICO suit then-U.S. Attorney Rudy Giuliani would name him as one of only two non-Italians on a list of 26 top mob figures.

When Bufalino ordered Sheeran to kill Hoffa, the Irishman did the deed knowing that, if he had refused, he would have been killed himself.

Sheeran’s important and fascinating story includes new information on other famous murders, including those of Joey Gallo and JFK, and provides rare insight to a chapter in American history. Charles Brandt has written a page-turner that has become a true crime classic.

NEPA Scene will update with more on “The Irishman” as it gets closer to release.