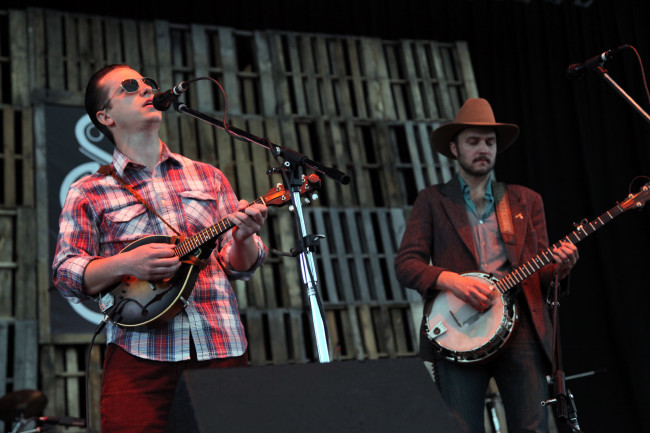 While they have officially been on hiatus for a little over a year, popular Scranton/Wilkes-Barre jamgrass band Cabinet still gets together here and there for their faithful fans. They reunited for a celebrated set at the 2018 Peach Music Festival, but it seems that they won’t be returning to Montage Mountain in Scranton this year.

Instead, they announced last week that they will headline Grateful Get Down 4, set for Friday, June 28 through Sunday, June 30 at the South Mountain Fairgrounds in Biglerville, Pennsylvania near Gettysburg.

Cabinet will play two sets on both Friday and Saturday, and the appearance is being billed as their “only festival performance of 2019,” so it’s safe to say that the full band will not be at the Peach this year. Members JP Biondo and Pappy Biondo, however, will play sometime during the eighth annual festival in July.

With “two nights of music and camping,” Grateful Get Down 4 also features performances by Melvin Seals & JGB, Willie Jack and the Northern Light, The Dirty Grass Players, Escaper, Odd Pocket Selector, Moonlicker, Shizzle Tang, and more to be announced soon.

“Can’t wait to get down with all our CabFam!” Cabinet posted on their social media accounts. “Tix on sale today. Get ’em while they’re hot!”

The BYOB event at the South Mountain Fairgrounds (615 Narrows Road, Biglerville) has “plenty of room to spread out and camp on flat ground, two stages with music running until 4:30 a.m., flush toilets, plenty of shade, electric sites available, family camping area, and craft and food vendors,” according to the festival’s website.

Tickets, which are $90 for Early Bird General Admission Weekend Passes (including camping) and $150 for limited VIP packages (including camping, a commemorative laminate, an artist-signed event poster also signed by Cabinet, and more), are on sale now via Eventbrite. For more details, see the Facebook event page or visit gratefulgetdown.com.

Cabinet’s last live show together was headlining a “New Year’s Eve Extravaganza” at the Clarion Hotel & Conference Center Harrisburg West in New Cumberland organized by A Bear’s Picnic, who are also involved with Grateful Get Down 4.

Garnering a huge local following and touring the country since forming in 2006, the band declared an “indefinite hiatus” in late 2017, playing a “farewell” concert at the F.M. Kirby Center in Wilkes-Barre on New Year’s Eve. They have since split into various other projects, including solo efforts by Pappy and JP Biondo, Pappy’s Kick & Banjo duo, and an experimental Americana/funk/blues band called Gatos Blancos. Drummer Jami Novak continues to play in the Village Idiots as well as other local bands like The Dishonest Fiddlers. Cabinet released their last studio album, “Cool River,” on Oct. 13, 2017.

For five years, the band also hosted and performed multiple sets at their own successful music festival at The Pavilion at Montage Mountain in Scranton, the Susquehanna Breakdown, attracting national acts and earning write-ups by major music publications like Rolling Stone. Their Peach Fest reunion at The Pavilion on July 19, 2018 was well-received by both longtime fans and newcomers alike, so while the group is still split up across different states and bands at the moment, the “CabFam” will at least have one big opportunity this year to see them share a stage.