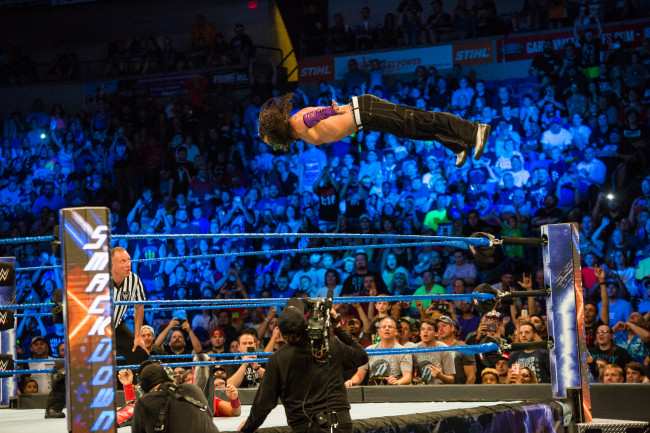 Today, the WWE announced that the “WWE Monday Night Raw” event originally scheduled for Monday, May 11 at the Mohegan Sun Arena at Casey Plaza in Wilkes-Barre Township has been postponed and rescheduled to “WWE Friday Night SmackDown” on Friday, Oct. 30. All original tickets will be honored for the rescheduled date.

Revised ticketing links will be posted soon to purchase tickets for this event. Tickets, which start at $23.50, will be available online at ticketmaster.com.

The event card was set to feature Royal Rumble Champion Drew McIntyre vs. Randy Orton and the Street Profits vs. Seth Rollins and Buddy Murphy, along with special appearances by Shayna Baszler, Becky Lynch, and Charlotte Flair. The new lineup is TBA.

WWE released a special public service announcement this week that said, “At WWE, we believe there is something more important than this… and that is you – the WWE Universe. In these difficult times, your safety and health is paramount. The Superstars and the memorable moments will return… and when we do, we want to see you there. Because putting a smile on your face is what we do, and we can’t wait to do it again.”

Wilkes-Barre/Scranton Penguins hockey games at Mohegan Sun Arena are currently postponed while several concerts and tours coming to the arena have been postponed (Tool, Lauren Daigle) or canceled (“Jurassic World”) due to the coronavirus pandemic.

As of now, shows scheduled in May through the end of the year – Aaron Lewis (rescheduled from March 13 to May 29), Alice Cooper (June 17), Bob Dylan (July 7), Tim McGraw (July 12), “Impractical Jokers” (Aug. 12), Alabama (Oct. 2), and Gabriel Iglesias (rescheduled from April 24 to Nov. 12) – will be still held unless the situation doesn’t improve. See the latest information on the status of all upcoming events at the arena at mohegansunarenapa.com.