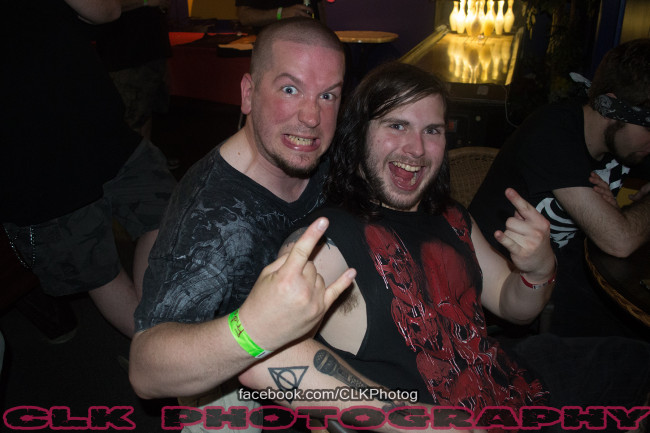 A sense of community was strongly felt at NEPA Metal Meltdown on Friday, May 8 and Saturday, May 9. Everyone at Diane’s Deli & Internet Cafe in Pittston seemed to know each other, and those who knew few people quickly bonded over their love of metal music with others.

This was NEPA Metal Meltdown’s second year, organized by Joe Karavis and Steve Jasuilewicz of Beyond Fallen. After its previous success, Karavis and Jasuilewicz decided to do it again in 2015. They both put a lot of work into this event and were ultimately happy with how it turned out. Karavis mentioned that both bands and fans were asking for the festival to happen again. Jasuilewicz enjoys organizing the festival because no one else is doing this for the local scene. He just wants to bring bands together and have a good time.

See over 300 photos from both days of NEPA Metal Meltdown 2015 here.

The bands featured in the festival were not only from Northeastern Pennsylvania, but also New Jersey, Connecticut, and the Philadelphia area. The diversity of bands was not just geographical, but also in style. While all the bands fall under the metal genre, they represented different metal subgenres, which is what Karavis and Jasuilewicz set out to do when choosing the bands to pull everyone together.

Many people at the festival stressed how important festivals like this are to this area. Their reasons for this importance ranged, but many agreed that these festivals are great for the community, give the bands exposure, and allow fans to meet each other. The need for more festivals like this in the area was expressed by much of the audience.

The community aspect influenced Kev, 21, to come to the festival to see Bloodeagle on Friday. Not only does Kev love to come to these types of shows for the music, he comes for the brotherhood he believes exists among the fans and with the members of the bands themselves.

Brotherhood also played a part in why many others came to the show. Cameron, 21, and Ryan, 22, attended the festival Friday to support their biological brother Tyler, 21, who is in Bloodeagle from Wilkes-Barre. Cameron thinks the exposure his brother’s band and the other bands get from festivals such as Metal Meltdown is great for them. Kathleen, 20, was also there to see her brother on Friday, who is in King Bison. She appreciated that the festival was a safe place for fans to have fun and enjoy the music while bringing the community together.

Many people found out about NEPA Metal Meltdown through connections with the various bands playing, such as Cory, 24, who has a friend in Threatpoint from Scranton. He was glad he came to the festival on Friday because he liked how open it was and that there was room to breathe. People weren’t crammed into a small space, but instead could move around and enjoy themselves more.

The bands clearly love what they do and had a great time performing. On Friday, Josh, 34, appreciated that the bands were there enjoying what they do and that’s why they do it – not for fame or money, but for the love of metal. Josh believes these festivals give the bands a shot to perform for people who may not otherwise get the chance to see them.

The audience had just as much fun as the bands. Miranda and Sierra, both 19, commented on the good time they were having at the festival on Friday. Although they came to see Threatpoint, they enjoyed all the bands. Ken, 37, also came to support his brother-in-law in Threatpoint, and it was his first time at a festival like Metal Meltdown. He thought the festival was really cool and he most appreciated the smaller, more intimate feel of it, which allowed him to meet new people and enjoy the experience even more.

Although many agreed with the importance of these types of festivals, William, 24, doesn’t think they’re really going to do much. He attended the festival Friday and shared his opinion that, even though he enjoys these festivals and thinks there should be more, he does not think there are enough to make a real impact because the Pennsylvania metal scene is all in Philadelphia and Pittsburgh and that’s where he felt it will stay.

On Saturday, the energy was even higher than it was Friday. Those who came on Saturday were soaking up the music and enjoying the experience. Jason, 37, loved it because he was able to see the talent of the area, which he felt does not get much exposure. He believes the area definitely needs to have more events and shows, but that it will be difficult with so many of the local venues closing down.

These events not only give exposure to the bands, they also give them encouragement, according to Eileen, 42, who attended Saturday. She always supports local music because she doesn’t want the scene to die out. She would love to see more all-ages events so more people have the opportunity to support the scene.

Seeing a lot of bands was the goal of Donna, who preferred not to disclose her age but said she is “up there” when she came on Saturday. She follows a number of bands who were playing, so she couldn’t pass up the opportunity to see them all together. She tries to support them whenever they play because she believes their talent is real and they know what they are doing. She loves that they play original music instead of simply playing covers. Donna’s only lament was that she wishes more people embraced these festivals because she thinks they would enjoy it if they just gave it a chance.

Alan, 27, desires more events like these because they are something to look forward to and they bring people together. Rob, 43, thinks these events keep the underground music scene alive in the area. Ilan, 26, knows these events bring in money, which will in turn allow for more events, so the more events the better.

From the perspective of the audience, the festival was a great success, which shows how much work Karavis and Jasuilewicz put into everything. Jasuilewicz saw no real difficulties that arose during the show, and Karavis said their biggest problem was keeping on schedule, though, according to Jasuilewicz, most of the sets were on time.

Thanking everyone who came to the show and everyone who was involved, both Karavis and Jasuilewicz agreed that this year’s event was a step up from last year. Many of the bands were used to playing for smaller audiences, so an audience this size was great for them. Jasuilewicz stated that the amount of people who came was the best part of the weekend because, without the fans, there would be no point in organizing the festival. Talks of 2016 had already begun as the late night came to a close.