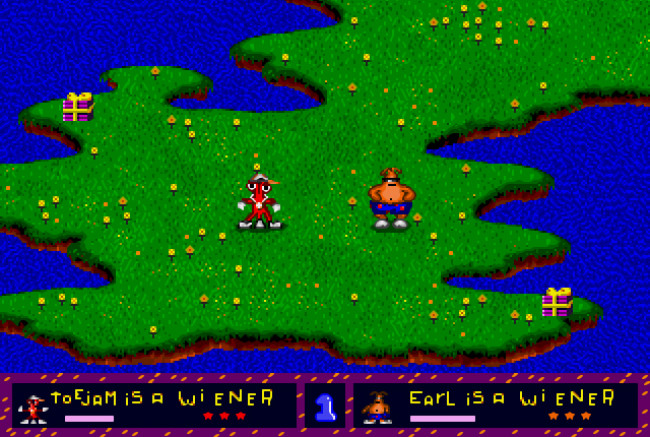 If only to this blogger, the phrases “changing the face of gaming” or “changing the way we play games” are two that are thrown around way too often, usually without regard or logical truth to whether or not those games deserve those accolades. In the 1990s, however, the gaming world was still trying to figure out what their target demographics really enjoyed, and while there were certainly some disastrous moments where gaming companies really didn’t put much thought into their creations, there were certainly times when it seemed everything clicked and gamers were given something quirky, different, and unique that they had not seen before and, perhaps, haven’t seen since.

This is especially true of today’s topic here on Turn to Channel 3, “ToeJam & Earl” for the Sega Genesis, a game just as beloved today as it was during its debut on the console. So what makes “ToeJam & Earl” so special? Why do Genesis gamers still fondly remember the first time they ever sat down to play it? Most of all, can it keep the attention of gamers today as it did in the ‘90s? Well, that’s what we’re going to find out today, so let’s journey forth with ToeJam and Earl!

There’s a common trend with most cult classic games – for better or worse, they capture an era, and “ToeJam & Earl” is a terrific example of this, just on soundtrack alone. These funky fresh beats (Damn, does that make me sound old and lame?) really suit this game, and the use of them, especially in transition, is very well done. If someone said in a meeting that they were going to take two random aliens, put them in a game, and add music like this, they’d probably wonder what the creative people behind it were smoking, but that’s the thing about any form of entertainment – you never know what will work and what won’t, and what seems like a sure thing can fail, while something that looks completely off course and out of left field can shine.

While there aren’t a ton of sound effects in this game, what’s there is used well to show things like comedy and, of course, further the theme of exploration. Nobody likes a game where you’re walking around, having to scope out an area for necessary items to progress in the game, while having to listen to terrible in-game music, but that’s certainly not the case here, and even someone who isn’t fond of the Sega Genesis can appreciate that.

The art style displayed in this game is obviously very cartoony, very humorous, witty, and showing that this isn’t a game or a group of people behind it that take themselves too seriously. That’s a really good thing, because another common trend in games like this is that you can tell the people working on it had fun, and I think if developers are having a good time creating the game, despite the long hours and challenges, then you’re pretty sure to have gamers enjoying themselves just as much, if not more.

That being said, if I have one gripe, it would be the size of the sprites. I can understand that with a game that has a larger scope as far as levels go that it was certainly easier to keep things as small as possible while still maintaining some kind of detail and personality to the characters, but considering you couldn’t even see the whole level when you started, as it was revealed a little at a time considering the hardware restraints, there wasn’t much of a reason to make them at least the size of most major 16-bit title characters of the time. What’s interesting is that the enemies, or those ToeJam and Earl encounter, are sometimes larger than ToeJam and Earl themselves, which is kind of weird considering they’re the stars of the show here. I do appreciate the variety of characters the duo encounter, though, as they are all quirky and unique in their own way.

There’s certainly no denying the appeal of “ToeJam & Earl,” even after all this time. When it debuted, it was praised for being a highly original concept, a unique mix of humor and adventure, and in 2015, that’s still very true. It has become a game that fans of the Sega Genesis use as an example of when they were really excited about a game coming out for the console that actually delivered on what it promised. In some ways, this is a game that is timeless in that it is still fun to just pick up and play, regardless of who you are.

It’s funny in that games like “Super Mario Bros.,” “The Legend of Zelda,” and even “Sonic the Hedgehog” are looked at as almost too serious and full of themselves in comparison to the humble and hilarious ToeJam and Earl. This is a game that encourages exploration and adventure, but less for the tasks at hand and more to experience the laughter and outcome thereafter. Games would come later with that same mix of quirky charm, but none would be possible, in my opinion, had a game like “ToeJam & Earl” not been as well-received by or entertaining to fans of the Sega Genesis.

Is “ToeJam & Earl” the very best game on the Sega Genesis? Of course it isn’t, but it doesn’t need to be. It offered gamers something different for the time, and it still does all these years later. We could all use a good laugh in our lives, and I think a game like this encourages us not to take everything so seriously and to learn to laugh at ourselves more often. Most of all, “ToeJam & Earl” teaches gamers, critics, and developers alike that not every game has to have flashy graphics, a complex story, or a company mascot to be a hit in the eyes of the fans. Good games are undeniable, even if one of the characters has the same name as that gunk that gets in between your toes.

Did I set the record for the most times the word “toejam” was written in a published blog? I sure hope so! I also hope you check out next week’s review, when we visit the Game Boy for one of my favorite late summer outings with everyone’s favorite Italian Goomba-stomping plumber.

Until then, I hope you’re enjoying what’s left of your summer, getting in as much gaming as possible, because it’s always a good time to game on!