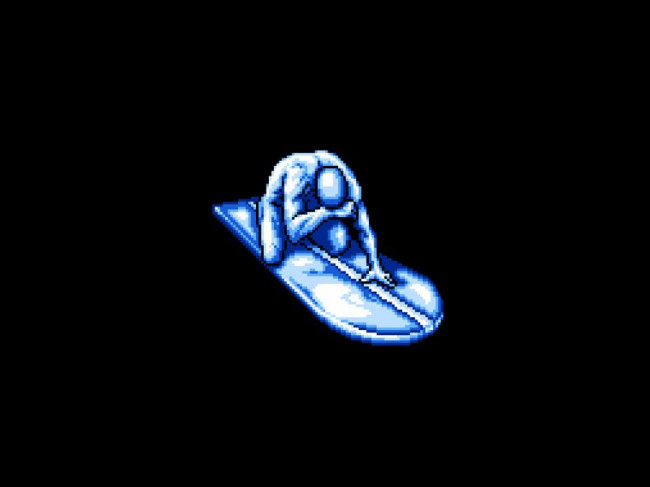 Friends, here at Turn to Channel 3, we’re not naïve to the fact that we live in a world where there are only two ways a film, television show or, yes, even a video game involving superheroes can go. These larger-than-life characters can either win major awards, garnering accolades and the praise of fans who proclaim that those behind the project truly get the character, and thus the world rejoices, or there’s the latter, where the project is a complete stink bomb, an atrocity, and nothing more than a slap of disrespect to the face of those who loyally follow this character and his or her many incarnations.

Now, as much as I’d love to say that we’re going to cover a good comic book-related video game today, it is still April, which means we still have two more weeks of “Now That’s a Bad Game” month, so buckle in, folks – the bumpy ride is far from over as we take off into space.

Today, we will be covering a game with some truly stellar 8-bit music, unquestionably some of the best on the console, despite not having those iconic hooks we’re so fond of on the Nintendo Entertainment System. Unfortunately, that’s truly the only thing this game has going for it. Hang onto your hats, kids, because today we’re riding with “Silver Surfer” on the NES!

As I said, this was a terrific soundtrack for a game that never reached the status of other NES titles with iconic soundtracks. The music heard here is mainly highly synthesized techno rock tunes that get your adrenaline pumping to play this game but, as you read on, you’ll come to realize that this is the equivalent of a desert mirage, an oasis of pure water that turns into hot sand under your feet.

While the music and sound effects are above average in this game, it cannot distract you long enough from the myriad of problems with “Silver Surfer” but, hey, at least you’ll be enjoying some sweet candy for your ears while you try to talk yourself out of throwing your NES controller through whatever unfortunate television is standing across from you.

Every level in “Silver Surfer” is a different environment filled with enemies – tons of them – and while I plan on getting into more about how this ties into the gameplay aspect of things as a whole, I do want to touch on the fact that, while these graphics are pretty good, they are also pretty distracting for your eyes and can often cause a lot of cheap kills in the game. Enemy projectiles can sometimes blend into the scenery, causing you to not even know what it is you were killed by.

It is also worth mentioning that, at times, going from side scrolling to a more isometric style in graphics can also be killer for your eyes – and for the gameplay. I didn’t find the levels, enemies, or bosses that imaginative, and the less said about the cut scenes the better, but “Silver Surfer” is not a game solely plagued by graphic issues – they are the first of many culprits you’ll discover as you try to save the day.

Where does one begin with the atrocity that is the gameplay in “Silver Surfer?” The problem isn’t that the game is another “one hit and you die” title for the NES, because there are many of them in the console’s vast library. The problem is that you can die from just about anything in the game, not just the enemies designed to hit and kill you. You can hit a ceiling, or you can try to soar over a piece of a level that looks harmless, only to die and once again stare at that depressing shot of the Sentinel of the Spaceways knelt down on his board, seemingly sharing the same pain you have playing this turd of a game. There are so many enemies, so many dangers with tight squeezes that almost always end in death – again, either due to an enemy, ceiling, or another object that decides to send the Surfer to his doom.

There are bigger enemies that have a line of fire you have to step in front of in order to take them out, which makes your chances of defeating it slim to none. Simple enemies take multiple shots to kill, and you know that other one hit and you die game, “Contra?” Sure, it’s hard, but when you die in “Contra,” you continue right where you are. Not “Silver Surfer.” Even though there are checkpoints, it appears more often than not that you will start all over again when you die. “Silver Surfer” requires iron reflexes that demand you plan two or three steps ahead of your next move, and even when you do, you really are riding a wave called, quite simply, a wing and a prayer.

It is also worth mentioning that the best, most effective, and painless way to play through this is with a controller that possesses a turbo button, unless of course you enjoy pressing the fire button so much that you wonder if you still have a thumb when it’s all over.

“Silver Surfer” could have been a great game, if the soundtrack alone is any evidence, but what was developed will go down in history as one of the worst uses of a licensed comic book character in gaming, hands down. There’s nothing wrong with an NES title being hard but, whereas as a game like “Contra” will kick you square in the nuts, “Silver Surfer” does that and then releases rabid wolverines high on angel dust to gnaw at your bones just because it can.

If you actually enjoy this game, chances are you are a gaming masochist and should really stop hating yourself that much; it’s unhealthy. “Silver Surfer” uses ideas that are staples of some great NES games and executes them in a way that is the furthest thing from the word “flawlessly” ever conceived by the English language. You’ve been warned.

Great, now I can’t get that sad “Silver Surfer” cut scene out of my head. As noted earlier, this is one of the worst uses of a licensed comic book character in the history of gaming, but it isn’t the king that sits upon the throne, oh no.

Prepare yourselves, friends, because finishing off this cursed month of terrible games is “Superman” on the Nintendo 64.

May is coming – think happy thoughts and make time to game on!