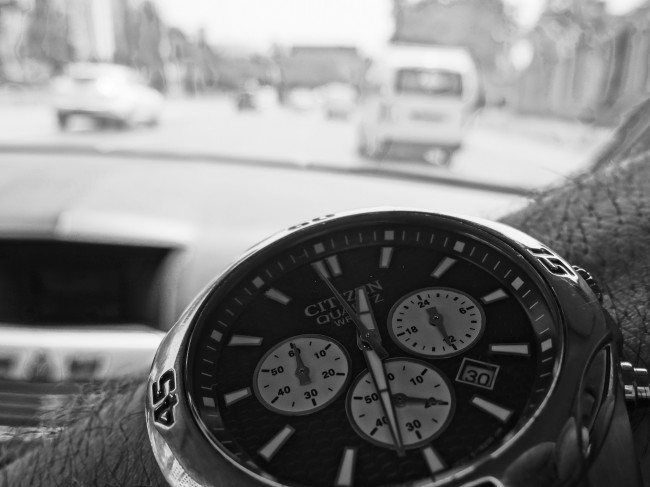 As I sit here enjoying an episode of “CHiPs” while I lazily type this article well past my deadline, it brings to mind the curious notion of musicians keeping time.

We do. We keep time all the time. But not the “One, and a two, and a…” of Lawrence Welk fame that undoubtedly came to mind when you read the words “musicians keeping time”.

Au contraire, mon ami. I refer, instead, to the irksome, perplexing, infuriating syndrome that is especially frustrating to those who value promptness as a virtue known far and away as “Musician Time.”

This is an affliction I am, at this very moment, currently working under the bewitchment of. See, this column was due a full day before I remembered to write it. In my defense, I have had an oddly busy week and I get overwhelmed easily. Also, I’m an idiot and hopelessly unreliable.

But, I have an excuse… you see, I’m a musician! And a lifetime of being so has culminated in having a fairly serious case of Musician Time-itis.

Musician Time? As you ponder the phrase and its possible nuances, allow me to expedite the inevitable and give you the distilled definition: If you request a musician to be somewhere at, say, three o’clock, it’s best for all parties if the actual time their presence is required be seven to nine o’clock, as that is when they will most likely show.

Now, this isn’t some ploy to gain dominance, some affected eccentricity to create an illusion of interesting-ness. Far from it. It is, in all reality, an inherent difference in the perception of reality. Time, being an ethereal concept at best, a total sham at worst, is open to interpretation to those of an artistic temperament. Indulge me while I try to explain it to both of us.

Time, despite the artifice of rigidity placed upon it by the society at large – a society, may I add, that artists of all stripes generally do not participate in, with some, quite honestly, not even recognizing its existence – is a flexible, fluid concept. In the true reality of things, it also doesn’t really exist. There is no 15 minutes from now, or yesterday. There is now. The rest is imagined and invented.

Also, when one is experiencing the conceptual “reality” of time, it can and will vary, dependent on location, activity, surroundings, whether or not your ‘roids are acting up, blah blah blah.

Don’t believe me? Then why does your work day (especially Friday) “take forever,” yet your vacation “goes by too fast?” Huh? Huh? Answer me, you sonofabitch!

If even those of the straightest, squarest ilk can perceive the varied nuances of time and can categorize the tendency of it to vary in specific ways dependent upon specific external stimuli, then it should stand to reason that those within (or without, depending on where you’re looking from) society who are prone to artistic observation and tend to manipulating their surroundings to suit their own personal perception of aesthetic would, indeed, have an entirely different and, subsequently, more lax view of time (than the view perceived by those not of an artistic temperament) and its relevance and importance.

See here, good folk! Someone whose entire life consists of staying up late, driving around, and sleeping standing up in bathtubs has very few “normal” responsibilities. Some of us don’t even have permanent addresses. Based on this criteria, it is not unreasonable to assume that someone subjecting themselves to this particular barrage of slings and arrows would have a different view of their fortunes, outrageous or otherwise.

I can get my kid to school on time. I can be on time for appointments at my shop (can, not always am). I can function very easily within the general population’s perceptions of time and reality. But it isn’t instinctual. It’s based, rather, on a desire to not disappoint, irritate, let folks down. And it has taken years of disciplined practice to get this far.

My natural state (as illustrated by this writing’s inexcusable tardiness) is to just… not be aware of what time it is. I lose days sometimes, albeit with greater infrequency since I quit chugging Jameson like it was my job, but there are still several calendar days just poof! …gone.

I can wake up at 5 a.m. for a 10 o’clock appointment, have all my ducks in their proverbial row by six, and still be late because I forgot to leave my house. I shit you not, this happens. And not just to me, but to every single creative person I know. Hell, one time a good friend and former bandmate who shall remain nameless once literally forgot to bring his guitar to the gig. Seriously. coughNathan Knottcough. Now, I’m the most irresponsible dude since Evel Knievel’s dad and even I was like, “Dude, whaddafaque?”

I know how entirely infuriating it is when we behave in this manner. Believe me, I do. Well, no, I don’t. I understand that it does infuriate, but why it does escapes me. And I think that maybe the crux of the issue is that it’s not that musicians don’t care about you – they just don’t give a flying fuck into a rolling donut about time.

Time is a constraint. Most artists are, by their very nature, rebellious. I know that, without any awareness, I am doing so; I will directly oppose anyone attempting to exert authority over me. It is impossible for me to be subordinate.

That’s not to say we (musicians) are unteachable, untrainable, or obstinate for the sake of obstinance. We are, however, hardwired to respond with intense refusal to being told what to do. Now, ask me to do the same task and I’ll not only do it with fervor, but I’ll most likely thank you for the opportunity.

Time (the concept of time, the reality is a different matter) cannot be reasoned with. It cannot be bargained with. It passes within the exact space in the universe as it always has and always will. It is rigid and formal and restrictive and so, when not simply disbelieving in its existence, I rebel against it. I simply am capable of no other options when face-to-face with time.

Where the hell was I going with this? I swear, I had my head together better when I was a raging pothead… only I was always really hungry for beef jerky and Tasty Klairs…

Ah, dammit! It’s gone. I lost it. Anyway, suffice to say that I sometimes rebel against time and sometimes just can’t even process the existence of the perception of it, but I never intentionally bungle up somebody else’s day just to be a dick. It happens very rarely these days, but when it does, it isn’t a malicious thing. I just don’t always get the relevance of “time” in my cosmos.

If you ask me to help you move and I don’t show until you tap the keg at your new place, it’s the former.

My being late with this column happens to be the latter.

And this whole, convoluted diatribe is how this particular musician tries to apologize for foisting “Musician Time” upon you all.