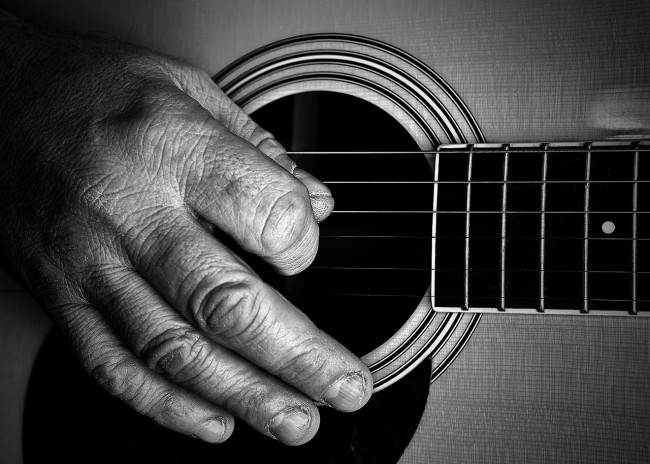 Musicians can be typecast, and in entirely erroneous roles.

Ferinstance, I’ll bet there are more than a few folks out there who picture me happily strumming away on an acoustic guitar, singing all manner of folky tunes or laboring over syrupy ballads.

But I don’t really enjoy playing acoustic music. Mind you, this wasn’t always the case, and there are exceptions. But, to be totally truthful, I find the entire experience makes me feel like I need a shower.

Solo or duo gigs cut costs by reducing the number of mouths to feed. They also cut load in and out time drastically, since your backline and front of house are usually the same, rather small pile of gear.

So, I’ve played a lot of them over the years. I’m generally significantly thinner when I’m playing acoustic. Because if I can afford so much as a pack of ramen noodles, I won’t do it! But the point is, I’ve ground the joy out of acoustic gigs due to the sheer volume of acoustic gigs I’ve been forced to play in order to make ends meet over the years.

I love to listen to fine acoustic music. We’re talking Simon & Garfunkel, Michael Hedges, Jim Croce, and their ilk, not the Jason Mraz, Jack Johnson stuff that is basically bad pop without a decent amp. But that’s just my personal tastes. We all know personal tastes are like buttholes – everybody’s got ‘em, and none of y’all asked me to show you mine. Sorry.

My point being (holy shit! He remembered his point! Well, kinda. Part of one of his points anyway… wait, what?) that I do not dismiss acoustic music out of hand. However, I don’t enjoy playing it. A duo is way better than solo, but it’s like the difference between a root canal and a filling – they both still suck. Knowwhatimsaying?

For me, the interplay between musicians is where I get off. It’s my high. Communicating an idea amongst like-minded individuals, creating something that is far greater than the sum of its parts, and conveying an emotion to those listening, who then interpret and reinterpret what we each tried to convey according to their own, personal perspectives… Man, how could there be anything more universally beautiful than that?

Yes, it can be done alone on an acoustic. I have done it myself. And I love singing along with only my guitar… but for maybe two songs. Then I need to bounce off other musicians. I need that interplay or I cannot effectively communicate, and that’s what it’s all about, folks – communication!

Music fans can sometimes be under an erroneous conception that musicians play music for them. And it’s been marketed that way, so it isn’t like they arrived at this conclusion without some help. This misconception has been perpetuated by the music business to sell more units. I totally understand its existence and have no truck with it. Business is business, and I get it.

But that doesn’t make it true.

Do I love the shit out of it when somebody remarks that they can relate to my songs? Hells yes I do! But neither that individual, nor any other individual, save yours truly, was the catalyst for the writing.

I do take great pains to make my personal experiences relatable to everyone, but it is still usually an individual experience I am trying to praise or purge, despite the outward appearance of a universal theme. I’m writing what I personally want to say, music that I personally want to hear, for me. Do I want to drag as many of you along, kicking and screaming, as possible? Of course.

But that’s secondary to my need to get it out!

Now, all of us as listeners take what we hear personally. If we love a song, it’s ours. If we despise it, then the writing of said rotten ditty was done to us. That’s why music is music. You can’t legitimately take the sentence “I saw a cat” and hear it as “I feel exactly the same way about cats as you do, Francine! I love kitties and they make me just as happy as they make you, and you are very pretty and those jeans make your ass look fantastic!”

But you can do that with a song.

Here’s the point where I realize I’ve gotten off track and have to reread what I wrote to see if I can remember what it was I wanted to say. Be right back…

…OK. So, I am, for all intents and purposes, a hard rock musician. I love old Alice Cooper band (up to and including “Nightmare,” which stands entirely on the merits of Dick Wagner’s playing), I love Thin Lizzy (Scott Gorham – ‘nuff said), Allman Brothers, Pre-Johnson AC/DC, new and new-ish bands (compared to the litany of ‘70s icons I mentioned above) like Ufomammut, Uncle Acid, Rival Sons, Bongripper… you get the idea.

And, although I listen to and enjoy Jim Croce, Harry Chapin, etc., they move me in a very delicate way. The sort of fragile, small emotions that can be just as easily stimulated by a kiss, or rolling in the dirt with a bunch of puppies.

Heavier music evokes a feeling of invincibility, of permanent, inexhaustible youth; it makes me 6-foot-10 and bulletproof. As much as I love getting weepy over an insanely well-written breakup song, the juice I need, the power I crave, is only in heavy stuff, listening to or playing it. Heavy music scratches an itch I can otherwise not reach; mellow stuff tickles a spot I can get to without much trouble.

Mellow music gets you in touch with your humanity, like so much of the pretty, sweet side of the world can. But only heavy music makes me feel like a god! And by god, I mean Satan! (Just kiddin’!)

But my actual point is that I am good at playing acoustic music. I can move people by doing so, and I enjoy moving people. I enjoy getting their emotions up. But that’s not why I started to play music, nor why I continue to play today. I play music for myself, and I prefer electric music, by far and away.

Think about it like this: A musician spends years in isolated practice just to get good enough to play with other people. Then, years of practice while locked in a room with a bunch of other sweaty musicians (it is not as fun as it sounds, pervs). Then, years driving around like an idiot, playing dives where all anyone wants you to do is stop so they can watch the game, seeing the daylight less than a coal miner. Then, suppose you make it? Then what? Endless legal wrangling, a mansion you never see, compromised integrity in order to facilitate a better contract so you can afford to pay your roadies, failed marriages, estranged children, your accountant absconding with your fortunes (or your ex-wife), forcing you to tour until you die on stage a broken, shell of a man… do you actually believe anyone would go through all of that for a stranger?

Folks who haven’t heard me do anything but a cover of “Thirteen” think that’s what I do because I can do it well. I could most likely do polkas well, too, after playing all these years (and I’ve considered it. Those lederhosen-wearin’ motherfuckers make bank, yo!). And I’m glad they think that I am an acoustic musician, because that means I am doing the job part of music well. The job part is what we do for everyone else. But the art part (and I use the term loosely, as rock ‘n’ roll is more instinct than art and I have trouble using the word to describe it without cringing or giggling) is for me.

After an extended exile, I‘m thinkin’ maybe it’s time I let the art part back out. I suppose that’s the actual point of this meandering diatribe. I’m working out my next step, all the while trying to relate to all of you while I do it. Sorta like the songwriting I was discussing above. Lord knows I got off track someplace and can’t find my way back. James Joyce stayed on subject better.

Anyway, whatever I do next, it’s not gonna be fucking acoustic!

Can I borrow an extension cord?