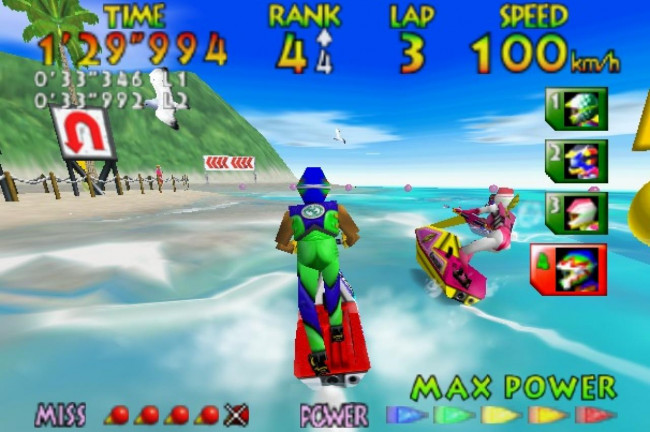 One of my favorite things about my business is tracking down some great consoles that people are just so fond of. While I am a diehard NES and SNES fan, I also cannot deny the fanfare and devout following the Nintendo 64 has developed over the years. As the last cartridge-based home console for Nintendo, as well as many of my younger customers’ first true experience with the company and the many franchises that make up the vast Nintendo juggernaut, I get requests for the console all the time.

That being said, I often bundle your standard N64 console with today’s topic on Turn to Channel 3, “Wave Race 64.” I thoroughly enjoy watching this game demo and seeing both kids and adults alike stare in awe at what they are witnessing, whether that be their first glimpse of the past or a fond memory of yesteryear. The question is, does “Wave Race 64” deserve that kind of reaction? Well, let’s hop on our jet skis and get to it!

The soundtrack to “Wave Race 64” just screams summertime fun in the ‘90s with an energetic, upbeat, ready-to-race vibe from start to finish. In games like this, fueling the player to keep going is crucial to the overall entertainment and replay value of the game, and I think the folks behind “Wave Race 64” knew this. The most successful, or at least most memorable games of the like each captured the feel of engaging in the subject matter, and “Wave Race 64” does this and then some.

With the addition of sound effects during the race, as well as an announcer offering his little quips (yes, this can be grating at times), you feel like you’re at an important event out on the water.

I can still recall gamers being wowed with how realistic the graphics in this game looked for the time, with special emphasis on accurate wave physics, which were notoriously difficult to program then, as well as the dolphins that swim alongside you and the mimicking of the sun reflecting off the water. Nothing on this grand a scale for this sport had ever been attempted, so the fact that developers were able to pull this off rather seamlessly with not much of a blueprint to go off of is pretty impressive if you ask me.

One of the most surprising and revered aspects of “Wave Race 64” is the variety and versatility of the game, which caters to many different kinds of gamers. At the time, gamers were still coming to grips with the unique Nintendo 64 controller, but “Wave Race 64” allowed players to warm up if they wished, to practice the controls so they weren’t going into the game blind.

In addition, while the core of the game is Championship Mode, there is also a Stunt Mode, which gives players a chance to get points by doing an array of stunts on their jet skis, and a Time Trial Mode, as well as your standard Two Player Versus Mode. Taking this a step further, you have the option of four different characters, each with their own strengths and weaknesses that cater to different styles of play. All of this creates a balanced, well-rounded game that can appeal to many kinds of gamers.

For many who grew up with the Nintendo 64 in their bedrooms and living rooms, “Wave Race 64” was one of the first games that exposed them to the new technological advances in gaming with the Nintendo 64 console, the other being “Super Mario 64.” This alone speaks volumes of the importance of this game to the history and even the success of this console. Relatively easy to obtain and inexpensive today, “Wave Race 64” is a solid accompanying piece to any serious N64 collector’s stash.

That does it for me. Tune in next time as we stay on the water with an arcade smash hit that made its way to the N64 – “Hydro Thunder!”

Until then, take care of yourselves and always make time to game on!