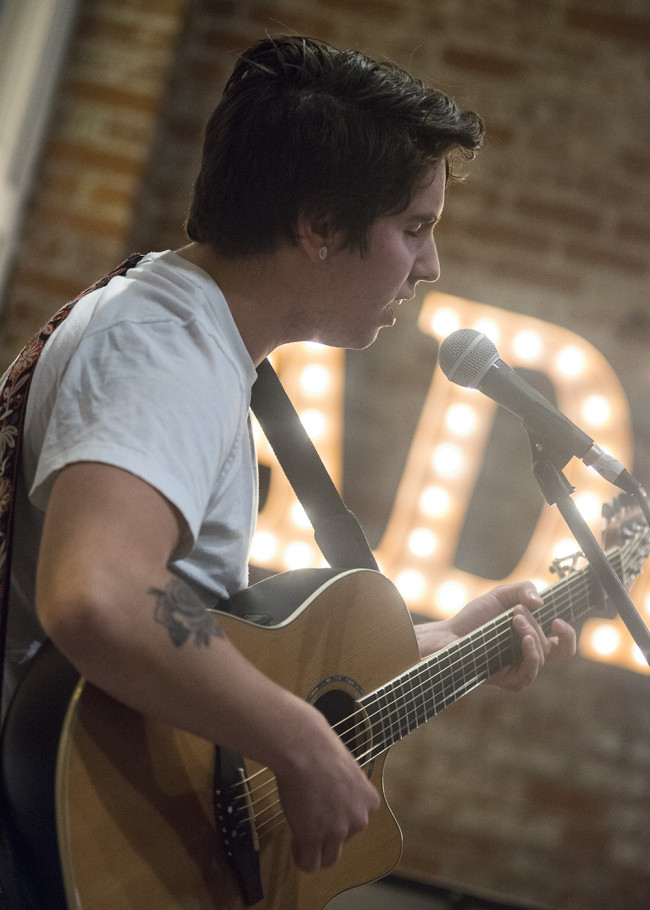 Over the past year, NEPA Scene has followed the rising career of young singer/songwriter James Barrett, seeing him perform at our events, having him as a guest on our podcast, and premiering two songs from his debut album. Just a few months after its release, the ambitious 19-year-old Clarks Summit native is already back with “The Metamorphosis E​​P,” due out Sept. 2 via Ronald Records, but we have another exclusive preview of one of the tracks that you listen to right now.

Much like its title, the new song, “Marrow,” digs deep as Barrett makes one of the most important decisions he has ever had to make, choosing his music over the path that many of his friends and fellow high school graduates will take.

“This song was kind of just about how I feel when I have emotions bottled up inside. It’s about all the different things I’ve felt inside since I decided to not go on to college. Towards the end of my school year, I would play guitar every day during my free period. This was one of the songs that came out. It was towards the end of the year and everyone is constantly talking about colleges and whatnot, but that was not how it was for me. I was only thinking about getting on the road and making my music grow,” he explained.

“So, overall, this song is about the nervousness that comes with making a decision like that and wondering whether or not I was making the right choice.”

What is clear is that he has the chops to make this bold choice, showing songwriting abilities beyond his years, being nominated for “Best New Artist” and “Song of the Year” for “The Window” in this year’s Steamtown Music Awards, and catching the attention of Nik Bruzzese of Man Overboard, who runs a new recording studio called The LumberYard in New Jersey with Ace Enders of The Early November. Bruzzese invited him to record there after hearing his music on Spotify, so on July 9, in a little over eight hours, they finished recording all four songs with the help of Barrett’s friends Terry Hurst Jr. and David Sorokanich.

“David plays lead guitar in my band Emberá. Terry and I have been neighbors our whole life, and we used to write songs together from our days in Bad Answers and our old acoustic duo Shop Local when we were in middle school. I could not have asked for anyone else,” he said.

“Terry also played lead guitar on the title track of my last album. They were phenomenal in the studio and out. They are both incredible musicians, and they helped make this EP sound better than I could have imagined. They are outstanding people, and I cannot thank them enough.”

“The Metamorphosis E​​P” will be different than his first album, “One More,” not just because it was recorded in a different studio outside of Northeastern Pennsylvania, but also because he was aiming for a more “nostalgic acoustic feel” this time around.

“For the new EP, I kind of had an idea in mind of how I wanted it to sound, which was more of a nostalgic feel with lots of reverb and electric guitar. It is still a similar to sound to what I had in ‘One More,’ just a little more defined and a step forward,” Barrett described.

“This song, ‘Marrow,’ definitely is the odd one out of the EP. It is the most upbeat track on the EP. The rest have a darker and more emotional tone. Lyrically, this song fits with the rest of the songs; musically, it stands out.”

The EP can be pre-ordered now on Bandcamp for $3, and Barrett can be seen live at the Sherman Showcase (522 Main St., Stroudsburg) with Black Tie Stereo, The Line of Fire, Brian Lowe, and Dreamhouse on Saturday, Aug. 20 and during the Electric City Music Conference with Shock Value, The Tellerz, and Ten Stories at the AfA Gallery (514 Lackawanna Ave., Scranton) on Friday, Sept. 16, among many other weekly shows that can be found on his Facebook page.

Inside there’s something moving
Some existential part of me
I’ve been dead, but I’m still somehow breathing
But I’ve had someone saving me