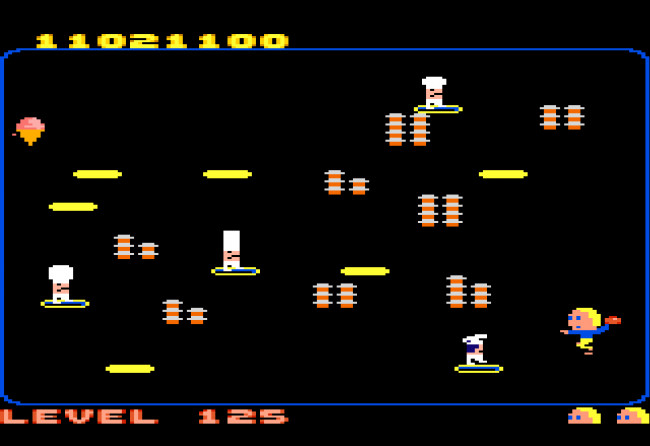 In today’s gaming world, having a game that’s different isn’t just a welcomed surprise to most gamers, it is downright expected. In the 1980s, however, this was still a fairly new concept, as it was too easy to either blatantly rip off a popular game or just be plain lazy and adhere to the status quo. You could say that, during this period of time in the history of gaming, it was even more important to stand out because the mass marketing machines of today didn’t exist then.

Today, we look at a game that, while beloved by those who played it, isn’t mentioned in the same breath as many of the far more popular titles of the time. Let’s head back to 1987 to toss “Food Fight” into the Atari 7800!

“Food Fight” doesn’t possess a soundtrack with depth because not all games at the time outside of the Nintendo Entertainment System did, but you have just enough to keep you interested and entertained. The tune that plays as you make your way through each level may feel repetitious and monotonous after some time, but the fact that music is playing throughout a level is still pretty cool for the time.

The action sounds are limited but definitely fit the game, with the whoosh of pies and other food being thrown. “Food Fight” is a chaotic mess of fun at times, and the miniscule soundtrack suits that theme just fine.

While each level is more defined by the characters and food present for weapons, I can excuse the bland, black room because it doesn’t take away from what you’re trying to do. The lack of defined levels does what it is supposed to do – get your eyes to focus on the action and not get lost in the middle of it all.

The food looks like food, your character, Charley Chuck, isn’t anything special to look at, but I still felt like I was playing something special that designers took pride in creating. During a time when hardware limitations were an everyday hurdle, I felt like I was looking at a quality game that was utilizing the strengths of the Atari 7800.

So let me ask you a question, dear gamers. What game in 1987 had instant replays that had nothing to do with sports? The answer, of course, is not many, and perhaps none that showcased the sheer awesome chaos of “Food Fight.” If you complete a level with a close call from an evil chef’s attack, you’ll get to see it all go down again in instant replay. I mean, come on, 1987 gamer, what more could you want? How about unlimited watermelons, pies a plenty, and your character engulfing an ice cream cone in a superb display of 1980s gaming graphics?

Well, that last part is the point of the game, to avoid getting attacked by chefs while trying to eat an ice cream cone before it melts. Is it riveting? Is it a deep, philosophically driven game plot? No, but it doesn’t have to be because food unites us all, and throwing it at evil chefs does so even more!

Points are scored for each chef hit, as well as 500 points if you get to eat the ice cream multiplied by the numbered level you’re on.

I’ve always subscribed to the notion that, at times, the best games are those that are the most straightforward and easy to pick up and play, and “Food Fight” fits that bill and then some. Sometimes when we’re blasting hordes of enemies or even creating our own “Super Mario Bros.” levels, we need to take a step back in time and just enjoy a game that doesn’t need to be this grandiose thing, but just simply a prime example of a rainy day game, something you can sit and enjoy for hours without having to do anything tedious in it. “Food Fight” is fast, fun, and challenges you in a way that keeps you coming back and, hey, isn’t that what all games are supposed to do?

I hope you enjoyed this review. Join me next time as we wrap up this month with one last Atari 7800 game, one that probably holds a record for one of the most absurd titles and premises in gaming – “Ninja Golf!”

Until then, clean your plate and remember, there’s never a bad time to game on!