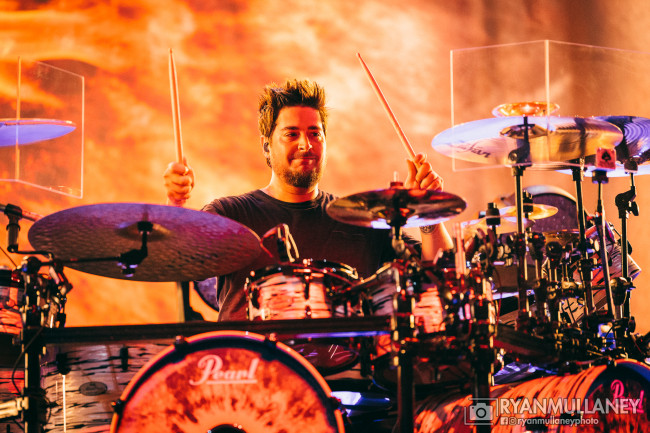 “Come Together: A Community Benefit Concert for the Arts” was announced last week and is set to bring 10 popular local bands to the parking lot of Mohegan Sun Arena at Casey Plaza in Wilkes-Barre Township on Thursday, July 16 at 6 p.m. to raise money for nonprofits, theaters, and performance centers that have been heavily impacted by COVID-19.

ViFolly, who say they have “something for everybody, from dueling guitars to huge vocal harmonies and mysterious heavy guitar riffs,” is the only act whose hometown isn’t tied to Northeastern Pennsylvania, but Foist is joined on the bill by his Breaking Benjamin bandmate Aaron Bruch, who will lead a Pan.a.ce.a reunion set on vocals, taking over for singer Tim Farley, who now lives in Texas.

An Ohio native, Foist has been laying down a heavy, meticulous groove on the road and in recording studios for numerous Midwest and East Coast rock bands over the past 18 years. He joined the current lineup of Wilkes-Barre rock band Breaking Benjamin in 2014, and their first album together, 2015’s “Dark Before Dawn,” debuted at No. 1 on the Billboard Top 200 and was certified gold by the RIAA in 2016. Their 2018 follow-up, “Ember,” debuted at No. 3 on the Billboard 200 and marked the band’s fourth Top 5 debut on this chart.

Prior to Breaking Benjamin, Foist was drumming for ViFolly and received rave reviews in the summer of 2013 as the drummer for Picture Me Broken, the opening act on Alice Cooper and Marilyn Manson’s nationwide co-headlining tour “Masters of Madness – Shock Therapy.”

Championed and inspired at a young age by his father Bill Foist, who played drums in classic rock bands from the 1970s up until his untimely passing in 2013, he acquired his core drumming skills from his first and best mentor while also sitting in on his dad’s band rehearsals in the basement of their Middletown, Ohio home.

Shortly after turning 10 – and at his father’s prodding – Foist entered his grade school’s talent show, playing to The Allman Brothers song “In Memory of Elizabeth Reed.” He received a standing ovation and was invited to join the school band. It was at that moment he knew being a drummer would become his life’s passion, profession, and obsession.

While still in high school, he received citations from Miami University in Oxford, Ohio in both 2000 and 2001 for drums and percussion, as well as receiving the prestigious Louis Armstrong Jazz Award for the 2000-2001 school year. He garnered the drumming basics from his father but also acquired practical knowledge from studying DVDs and books while fully embracing his natural ability by letting his instincts guide the beat.

Over the years, his drumming interests have crossed the musical spectrum – rock, jazz, metal, and even flavors of R&B. Though founding several bands with roots in pop and hard rock (Diesel 129, Mansonclover, Black Saints Cartel) and with his core skills grounded in rock and metal, Foist still views himself as a multi-dimensional drummer with no creative boundaries. His eclectic skill set behind the drum kit has landed him on numerous tours (Hinder, Vans Warped Tour, “Seduce and Destroy” with Otep and One-Eyed Doll) and sharing billing on tours with Trapt, Rev Theory, Dope, Shiny Toy, and Soil.

Foist’s precision, versatility, high-energy showmanship, skill, and confidence as a drummer was further bolstered by working in the studio with producers Robert Hannon, Dave Cobb, Shawn Grove, and multi-award-winning music producer David Bendeth (Breaking Benjamin, Papa Roach, Paramore), forever changing the way he looked at drums and his approach to playing them.

With influences including Neil Peart, Tico Torres, and John Bonham, he continues to study and be inspired by the work of his contemporaries and considers live performance and touring two essential keys in fully developing as an artist. When not recording, touring, or conducting drum clinics, he enjoys passing his valuable insight and life experience on to his students via in-person and online classes.

“Shaun was with us back in 2011 before he was with BB and is now with us as a full member. Shaun will be touring with us when he’s not on the road with BB and will be featured on our new material coming out soon,” ViFolly told their fans in April.

Their latest single, “Inferno,” features Foist on drums, and their next release, “Scarecrow,” is due out this Saturday, July 11.

Produced by Joe Nardone’s Gallery of Sound and Mohegan Sun Arena and presented by Geisinger, “Come Together: A Community Benefit Concert for the Arts” will be featured as part of the venue’s “Drive-In Live Concert Series” this summer, which also includes performances by Almost Queen, a tribute to the legendary rock band Queen, on Friday, July 17 and Grammy-nominated comedian Jim Gaffigan on Saturday, July 18.

A 40-foot outdoor stage will be set up near the venue’s East Gate and will be equipped with lighting, large LED video screens, and audio amplification for this concert.

Tickets for “Come Together” are $100 per vehicle ($25 per person with four people per car) and are on sale now at ticketmaster.com and the recently reopened NBT Bank Box Office at Mohegan Sun Arena (255 Highland Park Blvd., Wilkes-Barre) during the box office’s summer hours of operation.

Each ticket includes a parking space for a vehicle, along with the adjacent parking space to allow the patrons from that vehicle to get out and enjoy the event outside. For tickets purchased through Ticketmaster, only touchless mobile tickets administered through the Ticketmaster app (iOS and Android) will be valid for this event. A maximum of four occupants will be permitted per vehicle. Up to 1,000 vehicles will be permitted for the event.

NEPA Scene is an official media sponsor of “Come Together,” along with Alt-Natives on Alt 92.1, 97.9X, Rock 107, WVIA, Rockology Music Academy, and DiscoverNEPA.

BUY YOUR TICKETS NOW at Ticketmaster.com

State guidance on social distancing, public gatherings, and certain procedures and practices is subject to change. The Mohegan Sun Arena will keep customers informed of changes as they pertain to these events at mohegansunarenapa.com. For a list of frequently asked questions as it pertains to this event, visit mohegansunarenapa.com/events/drivein.