From a press release: For over a year, the entire Broadway and touring theatre community has been looking forward to reopening venue doors and welcoming back the public. Soon, local fans will once again be able to enjoy the laughter, love, and entertainment that only live performances can provide. Today, Broadway Theatre League of Northeastern […]

From a press release: NAC Entertainment and the Broadway Theatre League of Northeastern Pennsylvania announced this week that the next season of Broadway in Scranton shows at the Scranton Cultural Center has been rescheduled “as COVID-19 continues to uproot even the best-laid plans.” Those plans were set to begin next week with “Buddy: The Buddy […]

From a press release: NAC Entertainment and the Broadway Theatre League of Northeastern Pennsylvania have announced the new Broadway in Scranton season. Featuring four season shows along with three specials, the season begins in February of 2021 and runs through August at the Scranton Cultural Center at the Masonic Temple. Before the new Broadway in […]

From a press release: Misericordia University in Dallas will present singer and Tony Award-winning composer and lyricist Jason Robert Brown, best known for his work on the Broadway productions of “The Bridges of Madison County” and “Parade,” at its “Celebrating the Stars” concert on Monday, Feb. 10 at 8 p.m. in the Lemmond Theater in […]

From a press release: Direct from its smash hit run on Broadway, the international music sensation Rocktopia will continue to tour the country in 2019. An explosive musical concert event that fuses the most iconic 20th century rock with world-renowned classical masterpieces, Rocktopia features the works of musical innovators across centuries – including Journey, Mozart, […]

From a press release: On Saturday, Jan. 7, one of the area’s most loved performers, Wade Preston, Billy Joel’s backup, returns for two shows in one night by Harmony Presents in the underground theater of the Hawley Silk Mill. “It’s not often a man can sit in front of a piano and command full attention. […] 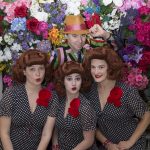