From a press release: Studio BE will present a free screening of the documentary film “Angst” at the F.M. Kirby Center in Wilkes-Barre on Wednesday, Jan. 15 at 7 p.m. In addition to this movie about anxiety and its effects, the evening will feature speaker Dr. Tiffany Griffiths, an in-person reading by Trauma Informed Mind […]

After the Scranton VegFest was canceled about a month before its inaugural event, a different event with different organizers has emerged to take its place – the NEPA Vegfest. The first-time event is “based on promoting compassion, health, and wellness in our community” and “will include craft vendors, plant-based food, speakers, cooking demos, music, yoga, […]

From a press release: Geisinger neurologist Dr. Mitchell Gross and a 28-year-old Laflin resident will be featured on CNN’s new medical mystery show, “Something’s Killing Me,” this Sunday, Aug. 27 at 9 p.m. on HLN. Emily Gavigan, who attended the University of Scranton, suffered from unexplainable medical symptoms. Seeking treatment at the Geisinger Wyoming Valley […]

After being announced in February, the first Scranton VegFest has been canceled a little over a month before its inaugural event. Set for Sunday, Aug. 13 at the Co-op Farmers Market in Scranton, the festival planned to not only feature vegetarian and vegan food, but all aspects of that lifestyle, including physical fitness and health, […]

From a press release: The world of art impacts people in a number of different ways – socially, recreationally, and spiritually. Continuing in that vein, a panel of distinguished speakers from a variety of disciplines will examine the impact the arts have on healing. The Lackawanna County Arts and Culture Department and the Lackawanna County […]

La Festa Italiana and other Scranton food festivals have their vegetarian options, but now the city is getting a festival free of meat and full of leafy green alternatives. The inaugural Scranton VegFest was announced on Wednesday with a video by RizeOptix posted on the festival’s new Facebook page explaining how the idea came together […]

September is National Yoga Month and serves as an awareness campaign to educate the public on the many health benefits of yoga and encourage healthy lifestyle choices. Throughout the month, yogis (yoga practitioners) host a variety of festivals and specialty classes to celebrate, as well as organize opportunities to reach new audiences and endorse regular […] 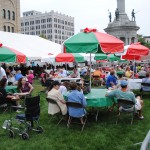