From a press release: Poetry in Transit, an award-winning community program now in its 10th year, has announced the 2016 contributing poets whose work will be featured on Luzerne County Transportation Authority buses. The poems stay up for one year with a monthly rotation so that riders can see all poems over time. The theme […]

From a press release: The September edition of the Writers’ Showcase reading series will be held at the Olde Brick Theatre (126 W. Market St., Scranton) on Saturday, Sept. 24 from 7 p.m.-9 p.m. This showcase will feature varied writers Iris Johnston, Jenica Lodde, Mike Stevens, Craig Czury, and Carla Christopher. The event is $4 […]

The Breaking Ground Poets held their first poetry slam of the season on the second floor of the AfA Gallery in downtown Scranton on Saturday, March 26, letting 10 young poets express themselves for the chance to be heard and advance to the Brave New Voices poetry slam competition and festival in Washington, D.C. in […]

What I learned from the Brave New Voices Convening in San Francisco, representing the Breaking Ground Poets

As longtime followers of NEPA Scene may know, we’ve covered events held by the Breaking Ground Poets several times, which eventually led to a partnership with the group that became our bi-monthly Youth Scene Open Mics at Adezzo in Scranton and Twigs Cafe in Tunkhannock. I’ve enjoyed working with this local volunteer organization that fosters […]

From a press release: The winter edition of the bi-monthly Writers’ Showcase reading series at the Olde Brick Theatre (126 W. Market St., Scranton) will be held on Saturday, Feb. 27 at 7 p.m. and will feature varied writers Harold Jenkins, David J. Bauman, Mason Crawford, Jason Allen, and Alicia Grega. The event is $4 […] 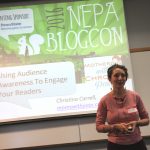