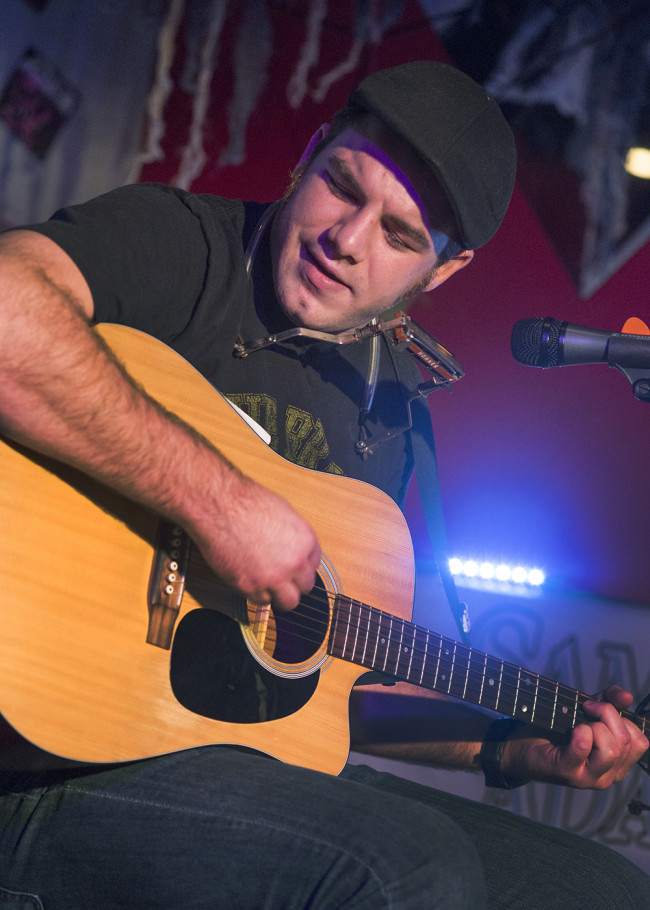 Every week of NEPA Scene’s Got Talent, our free open mic and talent competition at Thirst T’s Bar & Grill in Olyphant, we feature a quick Q&A with the latest audience vote winner, which was Clarks Summit singer/songwriter Mat Burke on Sept. 29.

Burke, who is living in Clarks Summit until he graduates college in May and moves back to Philadelphia, “the only city I have ever called home,” we talked to him about winning Week 5 with his high-energy folk rock songs.

MAT BURKE: I saw a lot of people I knew tagged NEPA Scene’s Instagram, but my friend James (the previous week’s winner) was the one who convinced me to come out and play. It was a really fun time. I’m glad I made it out.

NS: For those who don’t know you yet, tell us a bit about your background as a musician. How did you get started, and what have you done so far?

MB: I am a “folk rock” singer/songwriter. I grew up a punk rock kid and played in a bunch of punk bands, so I think I take that attitude and energy on the stage and just yell about how I feel like I did then, but now with an acoustic rather than an electric guitar.

I have been touring across the country and played everywhere from Texas to Maine. I lived in Nashville for three years, and it was a great home base for me while I booked tours north and south.

NS: You put on a very energetic performance last week. How do you keep up that energy, play two instruments, and sing all at once?

MB: Well, the energy is driven by the songs, specifically the lyrics. Every word really comes from my experiences in life, with girls, with my inner struggle, and the road. It’s hard not to wear my heart on my sleeve when singing those types of songs.

The multi-instrument thing started when I wanted to add harmonica to my act because I’m not a very strong lead guitar player. I later added the kick drum and high hat because it was very hard to find a band that I could count on to tour and travel with me. I wanted to give off a fuller live sound, so I started the one-man band thing. With four or five different instruments going on at once, it can get a little tough, but if I just turn everything off and focus on the song, it really comes through.

NS: Tell us a bit about the inspiration behind your songs.

MB: The inspiration comes from a pretty dark place, to be blunt. I think sad songs are the most honest. All these garbage happy songs we hear on the radio day in and day out are just like fast food; people know it’s bad, but they eat it up anyway. I’ve had a strange obsession with blood in my songwriting. I love what it can mean to different people, and as a symbol, it couldn’t be any stronger.

NS: How many songs/albums do you have out?

MB: I have four official records out – they are on iTunes and Bandcamp – but I’ve got hundreds of old songs with pretty low-fi recordings and dozens of yet-to-be-recorded songs.

MB: It is something I would like to pursue as a career. I have been working on it pretty hard the past 10 years, traveled countless miles, played every type of show imaginable, and met some of the strangest and nicest people in the world because of music. I love it, and I couldn’t imagine my life without a stage and a guitar.

MB: It was really nice. I was actually feeling pretty down that day about a lot of things going on in my life, and it was really reassuring to see people enjoy what I do.

MB: I think I won because I do something different, and I am nothing but honest with myself and my audience during my act.

MB: I spent most of it on my bar tab that night and the rest on gas.

MB: Just being able to do what I love on stage with other talented people.

MB: It’s really improving. When I left NEPA in ’07, there was next to nothing as far as live original music, and I’m happy to say, thanks to events like this, it’s getting better. It still is a struggle because most venues really only want people to play five hour-long sets with nothing but Top 40, Tom Petty, and Dave Matthews Band covers. It’s very disheartening when people won’t pay $5 to see a live band play their own music, but they will pay up for a guy playing with his iPod on stage or a poison – I mean, pumpkin – spiced latte.

Another thing that seems to be big in this area are these “pay to play” venues where bands have to purchase tickets and sell those tickets to their fans. Basically, they are paying a venue to give them zero support or advertising, and they never see a dime from the ticket sales. It’s a scam, and it’s getting harder and harder to find honest people and venues that just want to put on a good show.

MB: Just the headlining set this coming Monday. I am focusing on booking a southern tour that will start mid-December.

MB: You can find all of my music on Bandcamp. Most of it is available for free, so get on that! You can also find my music on iTunes, Myspace, Friendster, in your old Walkman, that burned CD in your Chumbawamba case, and on Facebook.