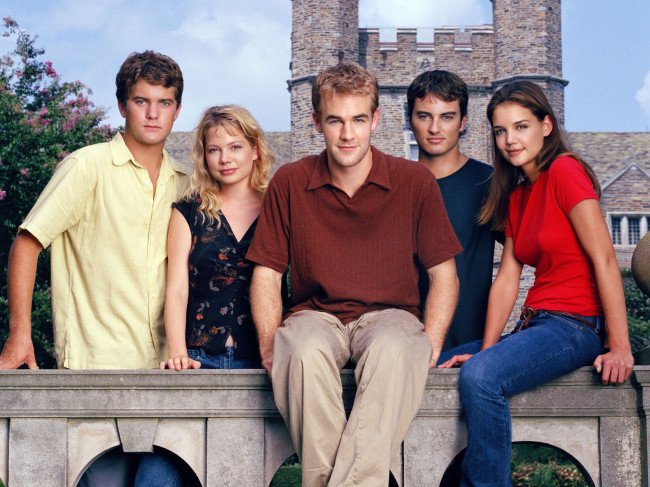 Hang on, that’ll need some clarification…

So, being 30, I assumed the show was just another pedantic, predictable teen drama (to those under 40, allow me to qualify – although in 2016, saying “another” teen drama doesn’t make sense, in the ‘80s and ‘90s, they were as prolific as hipsters in Williamsburg).

I was too “mature” to actually give the show a chance, while simultaneously being too set in my ways to second guess my own biases.

Now, I’m… even older. And “Dawson’s Creek” has been off the air for 13 years and would most likely never have crossed my mind again, except…

I have a friend (affectionately referred to by those in the know as the “Porch Ninja” due to her proclivity for leaving awesome items on my porch and fleeing into the night, undetected), and “Dawson’s Creek” is her all-time favorite show.

Granted, “Friends” is a shared favorite that we have continuously watched together, still laughing at the same jokes and going “Awwww!” at the same romantic gestures 20 years and a million viewings later. But “Dawson’s Creek” was her thing, not mine. I’d long since written it off.

You know when you have a friend who loves something and you think it’s dopey, but you pretend you don’t and then, inevitably, they ask you to try it? Like, beets or synchronized swimming or some shit? Well…

The Porch Ninja asked, neigh, begged me to indulge her and try and muscle through a few episodes of the Dawson. I half-heartedly skimmed a few when the show was on Netflix, but it was pulled from rotation within a week of my committing to what I deemed a truly unenviable task.

“Awwww, that sucks, I was just getting into it, too,” said I, absolutely relieved at my sudden reprieve. But it was not to be. I had spoken too soon. “It’s OK, I have the entire series on DVD!” said the Porch Ninja.

I managed to fend off the advances of Mr. Leery and Co. for almost a year but, eventually, the day came when my friend, the illustrious Porch Ninja, forgot to forget to drop off the DVDs, and I was now in the clutches of the gang from Capeside. I would not go quietly into this WB ‘90s nightmare!

So, pouting and reluctant, I put the first disc in the player and begrudgingly sat down to watch.
And so…

This Dawson kid has terrible hair, but I always liked that Paula Cole song. It’s unfortunate they edited out all the relevant lyrics to fit it into the opening credits. But, wait… is that Jann Arden’s version of “Good Mother” I hear? Wow. I forgot about that song! Ha! The “Mighty Ducks” kid just made a “Mighty Ducks” reference. I thought this show was really precious about itself. I’m surprised that it doesn’t take itself as seriously as I thought. Huh.

The characters, despite supposedly being half my age when the show premiered, have a depth and realness I can relate to, even though I’m now three times older. And they develop, not in a schmaltzy, predictable Hollywood way; rather, they become increasingly flawed and complex (or shallow, depending on their surrounding situations… kinda like real folks).

So… wait… this ‘90s teen drama has some relevance to a middle-aged dude in the 21st century? G’waaaaaaan! I never considered that this show might actually be well-written. I mean, it was for teenagers, right?

Oh yeah, so was “The Outsiders.” So was “The Breakfast Club.” So was “Rebel Without a Cause.” Huh, guess when I was 30, I knew too much to realize all that.

Not to mention all of the epic ‘90s accoutrement! The songs! Songs I may never have otherwise heard again! Softer, less revolutionary artists than Nirvana or Rage Against the Machine, etc.

These are artists and songs that have been pushed into the background by the larger-than-life monsters of ‘90s music, yet there are still viable and amazing songwriting and performances abound. This show is like an encyclopedia of things I’d forgotten, but shouldn’t have.

Seeing the weird ‘90s trend of every single article of clothing being of “relaxed fit,” the weird, semi-grainy film stock that was all the rage in the decade before last, the pop culture references that won’t mean a thing to anyone once Generation X has died off, leaving future viewers baffled as to their relevance…

All of these things, coupled with the aforementioned and unexpectedly brilliant writing grabbed me. Grabbed me, sucked me in, and made me a fan. So enamored am I with what is to me, for all intents and purposes, a brand new show, that I am currently binge watching the third season.

And, I must confess, I’d seen at least a little of the show during its original run, and my disdain for it was, at least in part, feigned so as to protect my cherished machismo. However, one of the greatest things about getting older and amassing wisdom is that you begin to give fewer and fewer fucks as to what people think of you. Seriously, anyone bitching about getting older is just flat out fucking doing it wrong. We all get older; we can’t stop it. But old is a choice. But I digress…

My point being, I feel compelled to, at the very least, partially recant my above declaration of having been completely oblivious to the content of the show and admit that I had, of course, seen it before, however fleeting. I had seen it, and I had not found it unpleasant.

But the real treasure, the true gift that I’ve gleaned from the seemingly simple act of watching an old TV show is that I’ve discovered something new that I can share with a person I care about.

Where “Friends” had been a common thread that had already been established, something we both already agreed upon and equally enjoyed separately, “Dawson’s Creek” was something new to me, and something they didn’t have anyone willing to share with them.

It’s ours. That specific connection didn’t exist before we made it; it is totally new and the sort of block that lifelong bonds are built upon, something exclusive to this relationship and no other, as “inside” as it gets. All predicated on my willingness to try something I was pretty sure I wouldn’t like.

It has happened before with different friends. Over Indian food, the Michael Schenker Group records, guitar shows, Top Five lists, and even such mundanities as working at the same shit jobs or despising the same teachers. Each bond is mutually exclusive, each is precious, each is irreplaceable and, unfortunately, as the lie of “adulthood” attempts to make us its bitch, these things happen less and less frequently.

Because we have fewer opportunities due to the crush of responsibility, or because we’ve conditioned ourselves to say no to anything that threatens to yank us from our comfort zone.

Because we’re afraid of the grandiosity of a meaningful relationship, or afraid that if we create one, we’ll eventually have to let it go.

We have a million excuses.

But all it takes is that one, as alcoholics call it, “moment of clarity,” an instant where, instead of no, we say yes to something uncharted, and you just might change the entire course of your life for the greater.

So, the next time a friend, loved one, or lover tells you about something they love that isn’t part of your lexicon, rather than dismissing it out of hand as “their thing” or, worse yet, ridiculing or criticizing it because you’ve yet to understand it, do something selfless and just say yes.

You might discover a relationship-defining, lifelong Porch Ninja-like connection over something as silly as agreeing to watch a ‘90s teen drama like “Dawson’s Creek.”

I mean, you don’t really want to wait for our lives to be over, do ya?