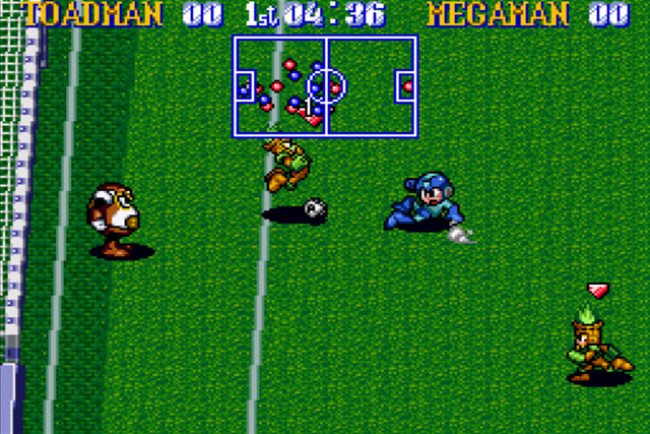 December has arrived, so here on Turn to Channel 3, I must ask the question: “Why have an ordinary December when you can have a Mega December?”

That’s right – all this month, we’re taking a look at some of the Blue Bomber’s adventures, including one today that probably had more than a few of us scratching their heads. Welcome to the first week of “Mega December,” which we’re kicking off with “Mega Man Soccer” on the Super Nintendo Entertainment System!

It’s hard to find fault in Capcom for wanting to take something like Mega Man and transferring that success to the soccer field of all places. At the time, while “Super Mario Kart” showed that Mario and his pals could succeed outside their usual roles, this was a risk that would lead to other gaming mascots having their own sports spinoffs.

Capcom has always been solid with soundtracks, especially within the realm of Mega Man, and “Mega Man Soccer,” for as bizarre as a premise as it may seem to some, is no exception to this. The title tune is catchy, each field has some great tunes unique to this game alone (without sounding like anything you’d hear in other “Mega Man” titles of the time), and the sound effects get the job done in at least sounding like a Capcom soccer game – one that just so happens to have its most iconic member on the front cover.

Each character is well-done, and the fields feel vast and unique to each hosting robot. I also want to add that the special shots all look awesome.

Variety is indeed the spice of life, and there are few titles of the era, especially those with Mega Man involved, with so many options. “Mega Man Soccer” allows you to test your skills in an exhibition match, go for a cup, compete in a tournament, or even be in a league! That’s a lot to cram into a 16-bit cart, and the fact you don’t have to be Mega Man in many of those situations makes it all the sweeter, as the ability to create your own unique team of soccer-playing bots is there for you, right from the start. Each player has their own distinct strengths and weaknesses, and those who know soccer can probably figure out what player suits each traditional soccer role best. For the rest of us, dream team it up.

Despite these options, one thing never changes – the fact that “Mega Man Soccer” is deceptively difficult, and with things like ultra cheap AI and pesky lag within the on-field gameplay at times, you’re not given much to alleviate that. At times, “Mega Man Soccer” will make you pine for the days where games slapped you in the face from the get-go instead of luring you in with this idea that you might actually be good at a soccer game. This is highly prominent in the cup and tournament modes.

“Mega Man Soccer,” to some, is Capcom’s choice of cashing in on the success of “Mario Kart” and, in some ways, just by getting noticed, they succeeded in such a risky move. However, “Mega Man Soccer” is a lap behind “Mario Kart” and made Capcom think twice about ever having a popular franchise in their catalog try something like this ever again.

If you’re still questioning whether to play this alternative to your typical Mega Man adventure, here’s one last thing to consider – “Mega Man Soccer” costs upwards of $50 in most cases, just out of sheer rarity and lunacy (in many aspects). As nostalgic as I am for this game, I don’t see it being worth $50, and neither should you.

Join me next week as we go back to the NES and “Mega Man III.” You know, where Mega Man shoots non-soccer things at non-soccer playing robots.

Until then, let the holiday madness continue as long as you find time between shopping trips to game on!