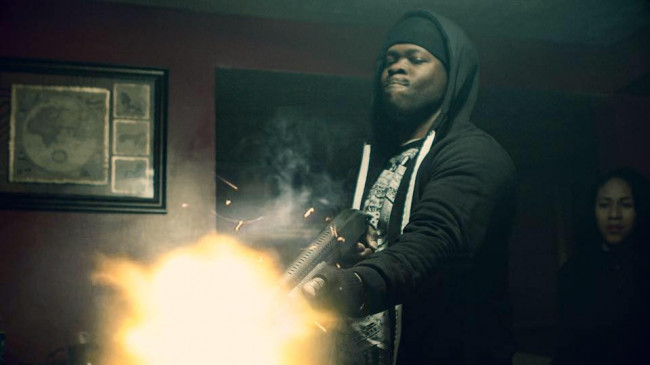 For two years, there has been a lot of local buzz, media coverage, and some controversy surrounding “The Barre,” a crime drama series set and produced in Wilkes-Barre. After a full trailer was released last year and the first episode screened at a live event at the River Street Jazz Cafe in Plains in August, everyone has been asking when and where they’ll be able to watch the entire series. We finally have an answer.

Created by Wilkes-Barre director Terrell Bobbett and written by Tetro Augury, the six hour-long episodes will be uploaded to YouTube, starting with the series premiere on Christmas Day, Dec. 25. After that, each episode of the independently produced show will be released for free every Tuesday, so subscribe to the YouTube channel to receive notifications every time a new episode is out. Many newer televisions and DVD/Blu-ray players have YouTube built right in, so it’s easy to stream “The Barre” through one of those if you’d rather not watch it on your phone or computer.

A new trailer was released last week to coincide with the announcement:

While some local residents aren’t happy with the way the city is being portrayed in “The Barre,” the creators of the show noted how Wilkes-Barre and Luzerne County’s history and recent opioid epidemic played into the setting in a press kit released last year:

Wilkes-Barre was founded in 1769 and formally incorporated in 1806. The city grew rapidly after the discovery of nearby coal reserves and the arrival of hundreds of thousands of immigrants. The city reached the height of its prosperity in the first half of the 20th century, when its population reached just over 86,000. Following World War II, the city’s economy declined and the Knox Mine disaster accelerated this trend, when large portions of the area’s coal mines were flooded.

Today, the city has a population of 41,498, making it the 13th largest city in the Commonwealth of Pennsylvania. It’s the same city that the infamous “Kids for Cash” scandal/film/documentary was based in. “Kids for Cash” documents the Pennsylvania scandal of selling children into the prison system at the hands of corrupt Judge Mark Ciavarella, Jr., how Ciavarella got embedded in the privatized prison system, how children were profited off of, and the plight of the imprisoned minors. Luzerne County is known as one of the most corrupt counties in the United States.

The decline of the economy introduced heavy drug use and attracted out-of-town criminal elements. Profits being nearly doubled in the drug trade has made the small town of Wilkes-Barre irresistible to the big city underworld.

NEPA Scene Podcast co-host Brittany Boote addressed this and talked about her experience as an actress and assistant director on the series in Episode 23 of the podcast:

Watch a “sneak peak” scene featuring local actor James Callahan as “Bryan,” a behind-the-scenes video, and an interview with Bobbett below: