From a press release: The artistic talents of 21 graphic design seniors at the Pennsylvania College of Technology in Williamsport will be showcased in “Graphic Design 2021,” the annual student portfolio exhibition in The Gallery at Penn College. Running from Monday, April 26 through Friday, May 7, the exhibit can be viewed in person at […]

From a press release: “Not a Breath of Wind” is the latest striking art exhibit offered by The Gallery at Penn College. The virtual display of moving kinetic sculptures and carved objects runs from Tuesday, March 16 through Monday, April 26 at the Williamsport gallery and on its website. Featuring images and videos, “Not a […]

From a press release: In keeping with other creative adjustments being made during the coronavirus pandemic, the Pennsylvania College of Technology’s annual graphic design student exhibit has moved online for the first time in its 12-year history. A May 1 reception for the exhibit was originally planned in The Gallery at Penn College in Williamsport, […] 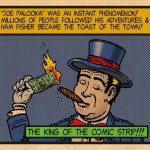