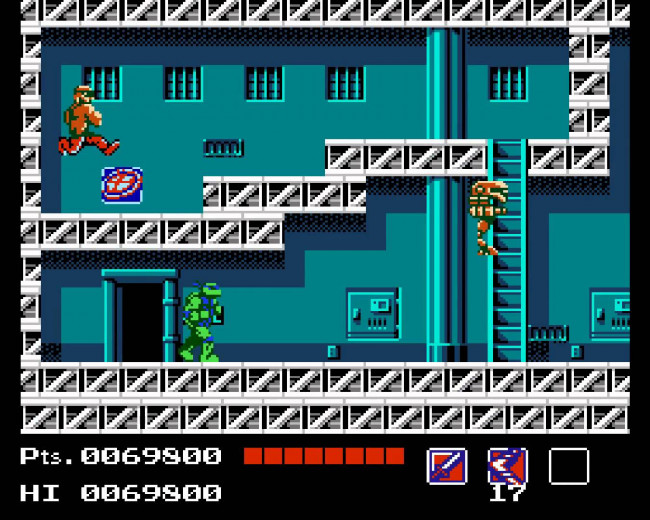 From yours truly to all of you, Happy Thanksgiving to everyone out there reading this, wherever you are. You know, sometimes being thankful about something is appreciating it despite its flaws, and that’s especially true with today’s topic on our final trek through November together.

It happens all the time when you grow up, looking at something from your past through a new set of eyes and realizing that something you were fond of back then truly wasn’t that great, but like those who want kids off their lawn, you appreciate the memories and the nostalgia just the same. Perhaps some of us are even embarrassed to say that they enjoyed a game that, in their 30s, they wouldn’t be caught dead playing. Either way, let’s put our differences aside for today’s topic in this month of games I’m thankful for – “Teenage Mutant Ninja Turtles” on the Nintendo Entertainment System!

What many of us were unaware of at the time was that Ultra Games, the developers behind this title, was actually Konami, finding a loophole, and an accepted one, in Nintendo’s licensing agreements that only allowed so many titles to be made by a developer per year so as to limit and thus generate high-quality titles. What isn’t a surprise to most people was that Konami (or Ultra) did another fine job of creating a pretty stellar soundtrack, which is something they were quite known for both in the arcades as well as on home consoles.

While the soundtrack isn’t necessarily a lengthy one and some tunes are used on more than one occasion, I’ve always felt good soundtracks have music that make you recognize the game the moment you hear anything from it, and this is definitely apparent in the overworld music alone. “TMNT” on the NES was a first for so many involved, and no one truly knew how gamers would respond. While many surmised that the title would be scooped up on the license alone, history in the gaming world has shown us that just a license isn’t enough to make a great game, so I feel developers made sure the soundtrack was good. Sound effects were sparse too, but what was there filled the action-packed feel of TMNT nicely.

Here’s the thing – it isn’t necessarily that the graphics are bad in this game, they are just, well, rather plain. The turtles themselves all look the same, with other colors and weapons to distinguish them apart, some enemies I am pretty sure never appeared in any TMNT comic or cartoon, and even the bosses (some of them I guess would be sub-bosses) are pretty short, boring, and not fierce-looking at all. The overworld portions of the game look pretty cool, and there are enough breaks in the levels to avoid being too repetitious in delivery.

I guess the best way to put things is that, while the arcade and follow-up console TMNT titles painted with a palette of fine oil paint, this was a game still using Crayola’s finest, and it has almost a cardboard cutout look to it in comparison to them.

Your nostalgic brain, your 8-year-old self, wants to give the folks behind this an A for effort, but your 35-year-old present self shakes his or her head and wonders what went wrong in retrospect.

So let us all collectively face some facts here. “TMNT” is a very, very difficult game that offers no apology in being so, and in a way, we accept that as par for the course during this era of gaming. However, there are still moments in this game that make us uneasy over 25 years later. For those of you who are now getting bad memories of the underwater electric seaweed level (I don’t care, that’s what I called it!), trust me, you’re not alone.

What makes that much more frustrating is that you can’t tackle this game simultaneously with a friend, which is such a bizarre misstep in retrospect that you almost want to find out who made such a bonehead decision, drive to their house, ring their doorbell, and then whack them with nunchucks before driving off. “TMNT” was in the arcades the same year this ended up on home consoles, and the reason it was such a success – more than the superb graphics, great soundtrack, and just all around great fun – was the ability for players to team up with friends to take down the Foot Clan. Why wouldn’t people involved in this NES game want to duplicate that experience at home? Sure, there were hardware limitations, but prior to “TMNT” being released, friends were enjoying co-op fun with “Double Dragon” and I just fail to understand how something as simple as utilizing the two controllers for the NES on such a title was so difficult?

For many gamers, these reasons alone are enough for them to skip the first installment of our Heroes in a Half Shell on the NES.

In a way, “TMNT” bucks the trend of many NES titles that have sequels being worse than the original and/or follow-up titles. At the same time, I wouldn’t necessarily call TMNT a bad game by any means, but I would definitely say it’s average when standing side by side with “TMNT II: The Arcade Game” (which got it right, or at least did better) and “TMNT III: The Manhattan Project.”

Average isn’t necessarily bad either, as copies in my store still sell quite frequently, although I truly wonder whether this is because people remember growing up with it, actually enjoy it, or are simply trying to complete the Turtles Trifecta on the console and purchased the more popular and thus more expensive titles first.

Well, that does it for me. I hope you enjoyed this month of reviews as we head into December and ask the age-old question, “Do you like Mega Man?”

What’s that? You do? Well then you’ll definitely want to check out next month’s reviews as we take a look at five, yes five, Mega Man titles as we salute the Blue Bomber!

Until then, enjoy some gaming in between those turkey legs, OK? Game on!