Kingston tattoo artist Ryan Ashley Malarkey has been quite busy lately as a strong contestant and fan favorite on Season 8 of “Ink Master” on Spike TV as well as the co-owner of The Strange and Unusual oddities parlor, but she recently took time out of her busy schedule to work with Inked Magazine on […]

Snoop Dogg is a larger-than-life celebrity whose fame extends far beyond his groundbreaking hip-hop career, but with his 14th solo album, “Coolaid,” he says he is returning to his “gangsta rap” roots, and he has recruited Scranton artist Justin Roach to help with the cover art, which features work by Snoop’s cousin Joe Cool, famous […]

From a press release: Howard Skip Sensbach, ceramic instructor and artist in residence at Misericordia University in Dallas, will have his sculpture “Burden” on display in “OH+5: The Ohio Border Exhibition 2016,” a six-state, regional biennial at the Dairy Barn Arts Center in Athens, Ohio from Jan. 22-March 12. This is the second time Sensbach […]

Who influences how we view Northeastern Pennsylvania? The answer is simple – everyone here. Wilkes-Barre-based creative marketing company Coal Creative is asking anyone and everyone to become an NEPA Influencer, doling out challenges that challenge participants to use their imaginations to “spread positivity throughout NEPA’s social network universe, using action to create change in a […] 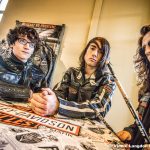