From a press release: As part of Scranton Tomorrow’s new Mural Arts Program, illustrator Eric Bussart and letterer Emmanuel Wisdom A. are installing a mural titled “The Dream” on the façade of a building on Mulberry Street in downtown Scranton. The process began today and is expected to be completed by the end of the […]

From a press release: Locals who have driven on Adams Avenue in downtown Scranton over the past week may have noticed a new mural on the side of The Leonard Theater building. With bright typography that reads “Human, After All” and imagery of poplar leaves and flowers, the social justice artwork was completed on Sunday, […]

From a press release: It is no secret that the communities of Northeastern Pennsylvania are feeling the social, economic, and health effects of the coronavirus pandemic. Keeping the integrity of social distancing intact but also attempting to unify people, the Street Art Society of NEPA would like to engage the local community in its Social […]

From a press release: A 501c3 nonprofit organization is working to brighten the small town of Lansford in Carbon County with a new mural that will be placed on Patterson Street on Route 209. Lansford Alive has teamed up with the Northeast Art Project, a Scranton-based mural company, to bring this project from an early […] 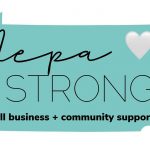 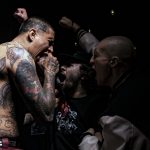