From a press release: It was announced today that Girl Named Tom, the first-ever trio to win NBC’s singing reality competition “The Voice,” will perform at the F.M. Kirby Center in Wilkes-Barre on Saturday, June 4. The group’s folk sound is built on the palpable voice of Bekah Grace and her two brothers’ beautiful harmonies. […]

From a press release: Texas blues legend Lucky Peterson passed away on May 17 at age 55, so Clarence Spady paid tribute to his longtime friendship with the late guitarist/keyboardist on his own version of “When My Blood Runs Cold.” The Scranton-based bluesman first heard from Peterson perform the bone-chilling song from his 2000 album […]

From a press release: Clarence Spady has long represented his hometown of Scranton as an acclaimed, internationally renowned blues musician. His recent signing to Nola Blue Records and plans for a new album in 2021 show a renewed focus on his musical legacy as an ambassador of Scranton. At the same time, Scranton has been […] 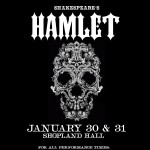