From a press release: After recently opening for multi-platinum alternative rockers Fuel, fellow Lehigh Valley Pennsylvanians Another Day Dawns announced that they have signed to Century Media Records in partnership with The Orchard. “It’s honestly been a dream come true,” frontman Dakota Sean started. “We’ve been working towards this goal ever since we were kids […]

For the last eight months, the Sherman Theater in Stroudsburg has been forced to either cancel or reschedule its concerts due to the coronavirus pandemic. Today, it was finally able to announce one for the end of 2020. Lehighton hard rock band Another Day Dawns, who have been climbing the Billboard and Mediabase charts all […]

Some people believe the concept of the drive-in theater is old and outdated, but during a pandemic that requires social distancing, there may be no better place to watch a film in public. While indoor movie theaters across the country remain closed due to COVID-19, the Circle Drive-In Theatre in Dickson City is preparing to […]

Today, Lehighton hard rock band Another Day Dawns debuted at No. 40 on the Mediabase Active Rock Chart with their single “Taste of Heaven,” a notable feat for any unsigned artist. The lead track from their new EP, “Stranger,” has over 100,000 streams on Spotify, and the music video, which was filmed in Pittston, has […] 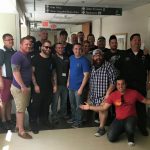