From a press release: The Everhart Museum of Natural History, Science, and Art in Scranton has announced a special event that pairs famous or infamous couples in history with a most appropriate dessert wine and delectable treats. “Ever 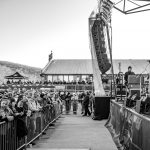