My heart has been broken. My community – my family – has been viciously attacked. At roughly the same time I was out clubbing with friends in Philadelphia, a nightclub full of mostly Latino people who were LGBT, just like us, were doing the same in Orlando, Florida. And just like us, they felt safe there. They felt they could be themselves. No disapproving stares, no hateful rhetoric thrown in their faces, no one to make negative remarks or slurs and shout at them. No one to tell them which bathroom to use, no one to decide how they should be living their lives. They were safe to be who they were, and love who they loved. As is so often the case, gay bars, nightclubs, and the like are where we go to congregate – away from the outside world – where we can be ourselves and have a good time. That safety was violated Sunday morning.

As I woke that morning, I was slapped in the face with the stark reality that hatred and bigotry definitely do still exist, and just how little I exaggerate when I say that there are people who want to kill us, merely for existing. Why are we such a threat? Why is being yourself and loving who you love such a radical, frightening idea to some people that they feel compelled to destroy us?

Sadly, violence against the LGBT community is nothing new. We are well-versed in the effects of toxic masculinity, extremist religious beliefs, and intolerance – we face it every day. From Stonewall, where police raided, beat up, and jailed LGBT folks, to the AIDS crisis, when President Ronald Reagan’s staff laughed and did nothing to stop it, to the Matthew Shepards of the world who lived out their last moments in fear and agony, to every last transgender woman of color – over two dozen killed last year, and a staggering start on that number this year – this is nothing new. Our community has always been under attack. 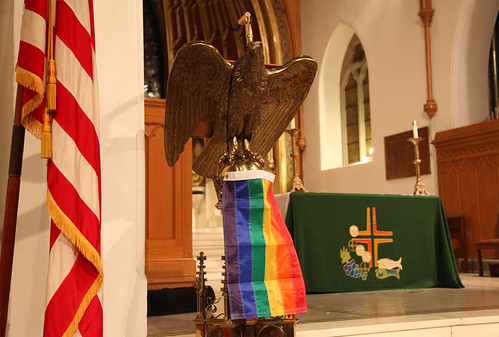 It’s hard to fathom why some would choose the isolation and darkness of living in the closet until one takes a look around and sees how much effort there is to keep us there. From legislation that makes it impossible for us to live, to the bigoted viewpoints coming from the church and in the comment section of every news piece that talks about us, to the erasure by mainstream media and prime-time television that reduces us to laughable caricatures and demeaning storylines, it’s a cisgender, heterosexual world, and they never want us to forget it. And yet, somehow, we pick up the pieces, we nurse our wounded, and we carry on, with love, as we always have.

This gunman, empowered by hatred, chose to hurt one of the most vulnerable communities I can think of. The LGBT community has been one of the most altruistic, caring, and compassionate communities in the world. As we wade through death and pestilence, violence lurks around every corner, and yet we continue to strive to show compassion. We continue to love each other, even with threats of death and the fires of hell. We continue to dance and sing and live the lives we were destined to, and this horrific act in Orlando will hardly stop us from continuing to do so. I know it because I am them, and they are me.

This violence and this hatred, wherever it comes from, will not change us. I, for one, refuse to give in to Islamophobia. I refuse to be afraid of Muslims. I refuse to allow my grief and the mourning of my community to be turned and warped until it pits our marginalized minority against theirs, especially as I see Christian preachers applauding the actions of the gunman. For every time I’ve been told that I should fear the incoming “Muslim menace,” I can’t help but point out the extreme right-wing conservative Christians of this country who encourage and advocate for our deaths – merely for using the bathroom, merely for daring to hold hands with our partners in public, merely for existing.

The Republican Party and the conservative Christians of this country have wasted no time in showing us their ass this week. They couldn’t even wait for the bodies to cool before holding emergency meetings to pass more anti-LGBT laws and strip away any existing rights we already had. And you want me to fear Islam? How can I fear something that never threatened me personally when, for my entire life, I was trapped in the closet by the religious bigots who forced their beliefs on me, who physically threatened and hurt my friends and I? One horrific act could not blot away the stain of a lifetime of fear by those who preached love and compassion, yet never learned how to properly practice them. 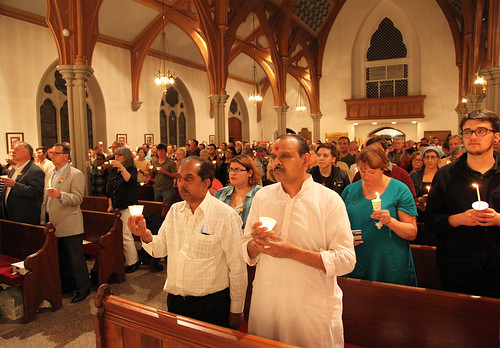 But I understand that Christianity, itself, is not to blame. I understand that the main tenet of Christianity is to love and do good for others – which is not unlike most religions, including the Muslim faith. It is only because of certain people who hate and fear those who are unlike themselves, who take the words of their holy scriptures and twist them into a license to kill, who commit these horrific acts. Christianity has been used as a tool of oppression for thousands of years by evil men. I’m sure this is not what Christ wanted.

It’s not hopeless, though. On Monday night, I gathered at St. Luke’s Episcopal Church in downtown Scranton, along with 200+ people, to hold hands, raise candles, sing songs about peace, and even pray. All of us, of many different faiths, backgrounds, genders, sexualities, colors, and creeds, gathered to hear the names of those who were struck down in the name of hatred. We would remember them forever. We hoped for a better, more tolerant, and loving tomorrow, but we acknowledged that such things do not simply come about by magic; they are hard won, requiring years of action and advocacy to make them happen.

Love will win, but only if we want it hard enough. We will not be afraid, and we will continue to live our truths, especially for those who no longer can. It’s hard for me to not look back in anger, and I will not forget history, but I’m learning to move on from it to make a better tomorrow. For the love of all of us, we must move on from hate.

Stop the violence, end the hate, live your truth.