Everything that’s coming to and leaving Netflix in June

While we recommend going out and supporting the local arts and entertainment scene as frequently as possible, sometimes you need to just curl up on the couch and watch some Netflix. Here’s the full list of what’s coming to the streaming service and what will be leaving in June. Available June 1: Employee of the […]

From a press release: Fathom Events and Comedy Dynamics present a not-to-be-missed cinema event featuring one of the biggest names in comedy with “Comedy Dynamics Presents: Bill Hicks,” in select U.S. cinemas on Monday, April 27 at 8 p.m., including Cinemark 20 in Moosic. The event will include approximately 90 minutes of stand-up and special […]

The fifth season of the epic fantasy series “Game of Thrones” begins tonight to HBO, so Scranton musicians Steve Werner and Dan King are celebrating with their own epic cover of the show’s main theme music. King, who plays cello in A Fire With Friends, and Werner, the drummer for Blinded Passenger, won the audience […]

From a press release: The wildly popular PBS Kids television show “Wild Kratts” is coming to the live stage – “Wild Kratts LIVE!” visits the F.M. Kirby Center for the Performing Arts in Wilkes-Barre for two performances on Saturday, Aug. 1 at 1 p.m. and 4:30 p.m. Tickets go on sale Friday, March 27 at […] 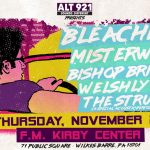