Philadelphia psychedelic rockers Needle Points released a trippy new music video for “Biting at the Rose” on Sept. 5, posted above. They recently performed the song, which is from their debut album, “Bom Tugangu,” for The Key Studio Sessions on WXPN 88.5, along with three other tunes. Listen to and download the entire session here. […] 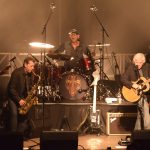