Alternative… punk… hard rock… whatever you want to call Black Hole Heart, you can’t say that this Scranton band is stuck in their ways. From their 2016 debut through their upcoming EP, vocalist/guitarist Kyle Lukasewicz and lead guitarist Steve Zampano have consistently let the music rather than genre conventions guide their songs. This will be […]

Exeter heavy metal band Royal Hell has been writing original songs and playing shows for three years, but they haven’t released an album of their hard work yet. That changes this fall starting with “Higher Court,” a new song accompanied by a dark music video premiering locally today on NEPA Scene. Living and breathing classic […]

In dark times, when everything seems hopeless, a hero will rise and… run away with an ice cream maker? In the classic 1980 “Star Wars” sequel “The Empire Strikes Back,” Willrow Hood is an obscure background character with only seconds of screen time as he flees Cloud City with a silly prop under his arm, […]

When Amanda Rogan’s first album released last year, the Northeastern Pennsylvania music scene was introduced to the soft, delicate music of Sweetnest, a personal project that comes from a place of love and vulnerability for the Scranton singer/songwriter. She is opening up again this year with a new EP on the horizon, and the first […]

The loss of a loved one affects everyone differently, so rather than just express how he personally feels about it, Scranton singer/songwriter Ed Cuozzo has been working since last April to capture many distinct voices and the heartbreak they’ve endured. As a result, the new album from his alternative rock band University Drive is a […] 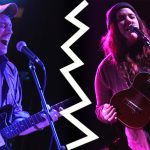