From a press release: On Saturday, Jan. 3rd at 8 p.m., Harmony Presents will showcase a jazz, funk, and improvisation group, the Dirk Quinn Band, in Hawley. “Fleet-fingered Philadelphia-based guitarist Dirk Quinn could easily be mistaken for the son of legendary rock guitarist Jeff Beck. However, Dirk’s fiery electric work is firmly rooted in jazz […]

Holiday on the Square and Christmas may be over for another year, but the memories are captured in photos and videos to remember every year after. Chris Balton Production & Design Group attended the second annual outdoor holiday marketplace with over 50 vendors and artists on Courthouse Square in downtown Scranton on Saturday, Dec. 6 […]

Mixing the atmospheric, sonic vitality of Taking Back Sunday and The Used, with a light-touch, straight-outta-1995 Matthew Sweet sentimentality and proto-punk inner child, Wilkes-Barre’s Down to Six kick out their jams with dynamics out the wazoo and more hooks than a professional angler’s convention. In short, this is a band never lacking in excitement or […]

The Push, the satirical Scranton rock duo made up of Jimmy Reynolds and Tim McDermott, hadn’t made a live appearance in over a year despite being as funny as they are musically talented, so what better time to gift Northeastern Pennsylvania with their presence than Christmas time? In conjunction with the venue’s two-year anniversary, the […]

Wyoming Valley West Senior High School in Plymouth held its annual Holiday Band Concert on Sunday, Dec. 14, so with it being Christmas Eve, NEPA Scene photographer Tammy Heid felt it was the perfect time to share some photos from the event. Under the direction of Andrew Kolojejchick, the band performed “Carol of the Bells,” […]

From a press release: On Saturday, Dec. 27, Wade Preston, Billy Joel’s backup, returns for two shows in one night at Harmony Presents in the underground theater of the Hawley Silk Mill. It’s not often a man can sit in front of a piano and command full attention. Wade Preston’s dexterity alone is enough to […] 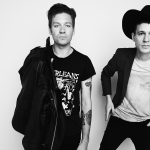